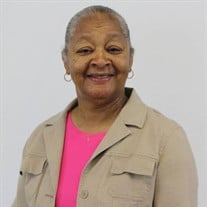 Kathleen L.M.R. Crestwell, beloved mother, mother-in-law, grandmother, sister, aunt, teacher, and friend died May 8th after a short illness. She leaves behind her two adult children, Robin Harris (Darryl) and John Crestwell (Joni); six grandchildren and two step-grandchildren. She was born Kathleen Robertson on April 21, 1943 in Washington, DC to David and Helen Robertson. She was the second youngest and youngest girl of their five children (David, Cecilia, Sheila, Kathleen, and Alfred) who would bless the Robertson household in Northeast, Washington, DC. Kathleen was educated through the District of Columbia Public School (DCPS) system, eventually graduating with honors from Spingarn High School in 1961. She was known for being an “A” student and bookworm. Kathleen continued her studies at the District of Columbia Teachers College, graduating again with honors in 1966. She immediately began teaching in the DCPS at Kelly Miller Junior High School as an English Teacher; a job she would keep for 28 years. She loved teaching—believing that quality education was the key to success in life. “Ms. Crestwell”, as she was commonly called, was revered by hundreds of the mostly African American students she taught. Known for “keeping it real”, she often, after correcting a student’s speaking grammar, would respond back to them in their vernacular (slang), a skill that made her immensely popular. She had that common touch and was able to relate to rich or poor students in an exceptional way that is indescribable. During her time at Miller, she received countless awards for her social and teaching skills including being honored as Teacher of the Year on numerous occasions. Kathleen was also the “senior class sponsor” for many years as well as “It’s Academic” coach. Her teams won several city titles in multiple years at all grade levels (7th, 8th and 9th). When Kelly Miller closed for renovations, she continued teaching at Evans Middle School until she retired after nearly 40 years in education. Bored after retirement, she started teaching again in the Prince George’s county Public School System for another decade, finally retiring in 2015. All in all, Kathleen taught for nearly 50 years! Besides being devoted to her family and students, Kathleen was a faithful member of the Hughes Memorial United Methodist Church in Washington DC. She attended the church just after its founding as a child, left for some time, but came back in 1979 with her children. “Hughes was a huge part of our development and character,” says Robin, her daughter.” Her son, John, remembers, “My grandma (who was attending Hughes) said, ‘Kathleen, you need to put those kids in church!’ That was all it took.” Like her mother, Helen, who was deeply engaged in ministry at Hughes, Kathleen, too became a committed Christian serving in many capacities: communion steward, bible study leader, Senior Choir member, historian and her favorite—the Intergenerational Singers. Kathleen loved to sing and she did to the end. In her later years at Hughes, she visited the “sick and shut-in” to support the pastoral care ministry, and did grocery shopping and food preparation for various groups and fundraisers at the church. There are many words that describe Kathleen… direct, sarcastic, funny, stubborn, tough, smart, witty, confident, purposed, dedicated, loyal, persevering, independent, generous, committed, and so much more… But the best word to describe her is LOVE. She loved her family, children, students, friends, and church with all of her “heart, soul, mind and strength.” This loss will be felt for a very long time. Rest now, Kathleen, with your mom, dad, brother and sister. You were a “good and faithful servant of humanity.” “Rise, expand and seek God unencumbered.” A private memorial service will be held for her on 5/29/21. It will be shown on Facebook live here: www.facebook.com/jcrestwelljr In lieu of flowers, the family would like donations sent in Kathleen’s honor to her congregation, Hughes Memorial United Methodist, 53rd and Ames Street, NE. Washington, DC 20019.

The family of Kathleen Lowan Maude Crestwell created this Life Tributes page to make it easy to share your memories.