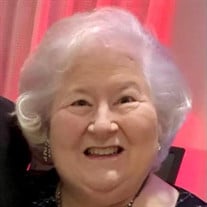 Katherine (Kathy) Landis Carpenter of Annapolis passed away peacefully at home on December 26, 2021, at the age of 77, having spent the preceding day in Parkton for a special Christmas celebration with her family. Born in Baltimore, MD on August 28, 1944, she was the daughter of the late Percy Illingworth and Katherine Hope Landis of St. Michaels and originally of Baltimore. Kathy is survived by her beloved husband of 32 years, Richard (Dick) Lee Carpenter of Annapolis. She was preceded in death by her older brother, William Baird Landis, whom she adored, and is survived by his wife, Judith Landis of Parkton, MD, her nieces, Lori Landis of Middletown, MD and Claire Landis (Hans Leiterman) of Chicago, IL, and her step-daughter, Valerie Helsel (John) of Ridgely, MD. Kathy attended high school in Baltimore, and graduated from the University of Maryland with a bachelor’s and a master’s degree in early childhood-elementary education. After college, Kathy celebrated by taking a trip to Europe and Russia–which sparked a passion for travel that continued throughout her life and took her to many places in the U.S. and around the world. Kathy taught at Kenilworth Elementary School in Bowie, MD for her entire career. Known as Miss Landis, she formed special bonds with hundreds of children, and loved when she would unexpectedly meet them later, and they would make a point of sharing updates on their lives. Kathy also served as an adjunct professor at Anne Arundel Community College for their daycare certification program. Kathy loved being with people, playing mah-jongg and bridge, and planning and hosting get-togethers for family and friends. After retiring, Kathy devoted much of her time to volunteer work, supporting several organizations and serving on the boards of Friends of the Annapolis Symphony Orchestra (FASO) and the South County Concert Association. The family asks that in lieu of flowers, memorial gifts in Kathy’s honor be sent to one of the following: FASO P.O. Box 1947 Annapolis, Md. 21401 South County Concert Association P.O. Box 141 Harwood, Md 20776

Katherine (Kathy) Landis Carpenter of Annapolis passed away peacefully at home on December 26, 2021, at the age of 77, having spent the preceding day in Parkton for a special Christmas celebration with her family. Born in Baltimore, MD on August... View Obituary & Service Information

The family of Katherine "Kathy" Carpenter created this Life Tributes page to make it easy to share your memories.

Send flowers to the Carpenter family.