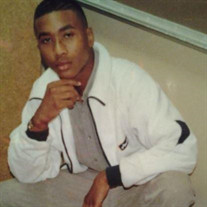 ***Please note, the date of the service has changed due to inclement weather. Services WILL NOT be held Wednesday, February 20, 2018. All services will be held Friday, Feburary 22, 2019, with Viewing beginning at 10:00 am followed by the Funeral Service at 11:00 am.*** Kacy Domico Queen Sr., was born June 20,1973 to Pamela Boldley and the late Arvine Queen Sr. in Baltimore, MD. Kacy departed this life on Wednesday, Feb. 6, 2019 in Hagerstown MD. Kacy earned his education through Anne Arundel County school system. On September 19, 2003 Kacy married Colleen Waters. In 2004, Kacy became the Chief engineer of The Country Inn Suites & Hotel in Annapolis, MD. Kacy also had an entrepreneurial spirit. He owned several businesses; a clothing store called PGF Manufacturing, which meant Put God First in Annapolis MD, a trucking company called Kacy & Son’s Trucking in Glen Burnie MD. Kacy was a hardworking man who loved doing anything that was hands on. He enjoyed spending time playing with his grandkids and just having the company of his kids. He loved to travel and cook, he could mix up something and make it a masterpiece. Kacy would brighten up anybody’s day with his jokes and laughter. He would always say call me “BIG KACY” and his signature line was “what’s happening!” We will all remember his big heart and the love he had for helping others. Left to cherish the memories of Kacy are: his mother Pamela Bodley of Annapolis, MD, grandmother Pearl Fuller of Annapolis, MD, one daughter Shakia of Millersville, MD, three sons Kacy Jr (Jhoseline) of Glen Burnie MD, Ian, of North Carolina, Nasir of Towson MD, and Torin, of Columbus, Ohio. One brother Arvine (Hippie) Queen of Baltimore MD, two niece Ny’Arah Queen and Destini M, Gasque. A very special Aunt Nola & Uncle George Pindell of Annapolis MD; grandchildren Liannie, Leah, Kylen, Khloe and Elijah and host of family and friends. Devoted cousins that were like brothers; William Pindell and Albert (Dink) Parker Jr. Kacy was preceded in death by his father Arvine Queen Sr. and grandfather Pop William Fuller, his daughter Karizma Queen, 3 grandchildren, Nasir, Nyriek and Paul (P3) and beloved cousins George Pindell Jr. & Lashawne Pindell.

***Please note, the date of the service has changed due to inclement weather. Services WILL NOT be held Wednesday, February 20, 2018. All services will be held Friday, Feburary 22, 2019, with Viewing beginning at 10:00 am followed by the Funeral... View Obituary & Service Information

The family of Kacy Domico Queen Sr. created this Life Tributes page to make it easy to share your memories.

***Please note, the date of the service has changed due to inclement...

Send flowers to the Queen family.