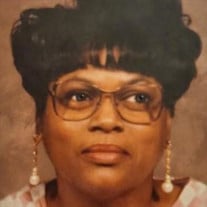 Joyce Marie Wilkerson, 76, affectionately known as “Marie,” was born on May 29, 1944 in Washington, DC to the late John Thomas Barnett Sr., and Catherine Barnett. Her parents moved to Anne Arundel County, MD when she was in the 11th grade. She attended the historically black Wiley H. Bates High School and graduated with the Class of 1962. On February 21, 1965, Joyce joined in holy matrimony with Frederick Gerard Wilkerson. From that union they raised three wonderful children. Cherishing her memory are two sons: Mark Wilkerson (Anika), Daryle Wilkerson, and one daughter, Shadonna Hicks (Carlos, Sr.). From those three children came the blessings of five grandchildren that will also hold her memory: Markell Wilkerson, Mark Wilkerson, Jr., Carlos Hicks Jr. (Raven), Chyna Hicks and Chela Hicks. Blessings and cherished memories continue with two great-grandchildren: Tahani Wilkerson and Jordan Blake. Joyce was employed in the service of helping and caregiving. She was first employed by Mrs. Gunther of Mulberry Hill, Annapolis, MD. Thereafter, she was employed at Ginger Cove in Riva, MD and Heritage Harbor in Annapolis, MD. Besides her parents, Joyce is predeceased by her brother Terence Barnett, her parents-in-law Herbert Wilkerson and Adele Wilkerson Creek, honorary daughter-in-law Lauren Beck, and Francine Wilkerson. She is survived by a loving and devoted husband, Frederick Gerard Wilkerson Annapolis, MD. Joyce also is survived by loving and devoted siblings: three brothers, William Barnett (Clara), John Thomas Barnett Jr., and George Barnett. One sister, Diane Barnett McPherson (Mac), and her cousin Betty Ray who was raised with her as a sister. Loving sisters-in-law Clara Barnett, Florine Barnett, Rosie Wilkerson, and Maryana Wilkerson Scott, one brother-in-law, Charles Thomas Dorsey, and a host of nieces, nephews, cousins, extended family, and friends. Joyce enjoyed solving crossword and jigsaw puzzles and word search. She was witty and fun loving. Joyce had the ability to catch you up in a joke, and at the very moment you were about to believe it, she would laughingly say “just kidding!” She loved to cook and made “mean” disk of potato salad. She was a loving and devoted grandmother Joyce will be sorely missed by many because she was loved by many.

Joyce Marie Wilkerson, 76, affectionately known as &#8220;Marie,&#8221; was born on May 29, 1944 in Washington, DC to the late John Thomas Barnett Sr., and Catherine Barnett. Her parents moved to Anne Arundel County, MD when she was in the 11th... View Obituary & Service Information

The family of Joyce Marie Wilkerson created this Life Tributes page to make it easy to share your memories.

Send flowers to the Wilkerson family.