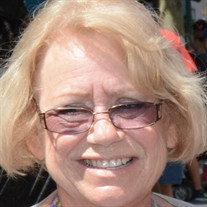 Joyce Ann Martin (Wright) age 71 of Dunkirk Maryland passed away on Friday April 17, 2020 with her husband at her side, at Anne Arundel Medical Center due to pancreatic cancer and related complications. She was born on January 1, 1949 to her parents John Henry Franklin Wright and Dorothy Lee Wright (Taylor), both of whom preceded her in death. Joyce was born in Washington, D.C. and grew up living in the metropolitan area. She was the fourth of seven children, three of whom preceded her in death. During her early childhood she spent numerous summers with one of her two Great Aunts, alternating summers with either Frances Dovel or Ann Ruffner. She always spoke fondly of those summers spent on their farms retrieving eggs for breakfast, being chased by roosters, helping where she could or just being a kid. While still in high school, she met David Martin in 1965. Childhood sweethearts you could say. After seventeen months of courtship, they married on April 1, 1967. That was April Fool’s Day, she would sometimes joke. It was a small ceremony performed in David’s Grandfather’s home, located in Hillside, Md, performed by his Grandfather Rev. Fay C. Martin. She brought three children into the world, David Henry Martin Jr in 1968, Kevin Wayne Martin in 1971 and Sheri Lee Martin in 1975. She worked at Star Snacks and Dodge City Market (both located in Forestville, Md) in the early years of her marriage. She began a career as a Crossing Guard for the Prince George’s County Police Department in 1975, a career which spanned over twenty-five years, and which she so thoroughly enjoyed due to her love for children. This career also permitted her to be at home with her own kids when they were not in school. She gained many friends throughout this period, many of whom preceded her in death. Her dedication led to receiving the award “Crossing Guard of the Year”; was honored by co-starring in a commercial for her union (American Federation of State County and Municipal Employees) which aired on national television; and served as Vice President of the local chapter of AFSCME. She would tell a particularly amusing story which took place during her training period to become a Crossing Guard in which one of her fellow trainees “While holding her hands up to stop and hold vehicular traffic approaching the intersection from her left and right, the trainer told the trainee to signal vehicles with their left turn indicators activated approaching from her front to proceed with their turn through the intersection. The trainee panicked and hesitated for several seconds as she did not want to move her upheld hands for fear that the traffic already being held would then proceed through the intersection. The trainer then sternly told her to turn the vehicle which was waiting to turn, upon which the trainee again briefly hesitated and then raised her right leg and kicked it out to her right in an attempt to indicate to the driver to make their turn. They all enjoyed a good laugh afterwards”. Joyce and her husband lived in a house they rented from his parents at 1273 Kaverton Road in Forestville, Maryland for four years (1967-1971); then lived at 1217 Glacier Avenue in Hillside (Now “Greater Capital Heights”) Maryland for fourteen years (1971-1985); moved to their present home in Dunkirk Maryland located in Calvert County, Maryland where Joyce resided with her husband and two of their grandchildren (Madison and Shane) until her recent death (1985-2020). Devoted wife, mother, grandmother, friend, etc., she always thought of others and unselfishly placed their needs and wishes before her own. Joyce enjoyed many different things throughout her life, especially those that involved family, such as the many family gatherings attended by her extended family members. Those gatherings provided the opportunity for all to reminisce about loved ones lost and to catch up on current events within the individual families. Her favorite holiday was without a doubt Christmas. Every year immediately after Thanksgiving Day she would spend her energy every day decorating the inside of her home from top to bottom and made sure her husband decorated the outside just as festively. She and her husband were also provided the opportunity to travel to Germany and Hawaii to visit their son Kevin and his family when he was stationed there during his career in the United States Navy. Both of these trips were cherished memories for Joyce. She and her husband also enjoyed numerous trips to Walt Disney World in Orlando, when they were able, sometimes by themselves and most of hem accompanied by various grandchildren. She loved gardening and would always make sure that there were flowers planted each spring in many locations throughout the yard, flower pots on the porch and deck, and inside her home. She would give all of them daily attention. Joyce is survived by her husband of fifty-three years David; her son David Jr; her son Kevin and his wife Dawn; her daughter Sheri; nine grandchildren: Brittany M. Gooding, Gilda Martin, Madison M. Martin, Bradley J. Kelly, Arrabella J. Martin, Devlin K. Martin, Ailika E. Martin, Shane A. Martin, Kara L. Prediger; her brother John D. Wright; her sister Linda F. Childers and husband John Childers; her sister Jeannie R. Duffy Wright; and her sister-in-law Brenda “Sue” Wright. Joyce is also survived by her favorite aunt, Fern Lockhart and husband Johnnie Lockhart as well as a host of nieces, nephews, cousins and friends. A celebration of life will be scheduled at a future date once Covid-19 restrictions are lifted

Joyce Ann Martin (Wright) age 71 of Dunkirk Maryland passed away on Friday April 17, 2020 with her husband at her side, at Anne Arundel Medical Center due to pancreatic cancer and related complications. She was born on January 1,... View Obituary & Service Information

The family of Joyce Ann Martin created this Life Tributes page to make it easy to share your memories.

Send flowers to the Martin family.