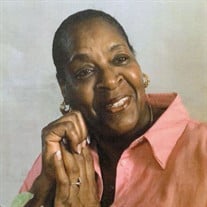 Joyce Geneva Brown, affectionately known as “Big Girl”, Mama, Mama Joyce, Aunt Joyce, Ms. Joyce, and Grandma Joyce, was born on September 15. 1946, in Harwood (Birdsville), MD, to the late George Leon Johnson and Mary Catherine Johnson. Joyce Geneva Brown left this earthly realm peacefully on May 26, 2022, after a long battle with cancer. It would be wrong to say that Joyce lost her battle because she never stopped fighting. No matter how sick she was, she was always determined. While others would have broken, Joyce stayed strong. Through her, we know what resilience and perseverance truly look like as she remained a very strong and proud woman. There was no quit in Joyce. Just because she is no longer here, it doesn’t mean she “lost” her fight. She always said, " I lived the good life and life doesn't owe me anything. I've been here for 75 years. You need to get out and do something and enjoy life - What you waiting for?". She remained a cheerful soul until the end. Joyce was married and divorced from John Brown. Their union resulted in two children: Tray Brown and April Brown. In 1978, she moved to Glen Burnie, MD where she resided for the remainder of her life. Joyce was educated in the Anne Arundel County Public School system. After receiving her elementary education at the Old Mill Swamp School (now known as Ralph J Bunche Community Center), she completed her high school education at Bates High school in 1964. Eventually, Joyce continued to further her education by attending Catonsville Community College in Catonsville, MD to complete Basic A/C & Refrigeration in 1981 and went to Anne Arundel Community College in Arnold, MD to complete Basic Electricity for Electronics in 1982. Joyce successfully completed a training program for the Nurse Associations of Maryland in 1996. Additionally, she furthered her education by attending Howard Community college and studying multiple courses. On October 26, 1996, she passed her credentialing examination and qualified for a license as Dietary Manager at Baltimore City Community College. Ambitious and hard-working, Joyce never stopped educating herself. In September 1999 she obtained a completion of Leadtec Services, Inc to be a Maintenance & Repainting Supervisor. Joyce's objective was to procure a job in the Health Field Service Management, or nutrition where she could make a significant difference in the lives of others. Joyce started her career as a school bus driver and in the 1970s- she worked for the National Industries as an Assembly Worker. After 3 years, she did begin a position as a Refrigeration piper at the Donn Corporation and remained there until 1987. In 1988, she began her journey in the food industry and worked as a licensed dietitian/ food service manager at the Hope House. Amazingly, she retired from Hope House as a dietary manager after 15 years of service. She continued working and started her own cleaning company called JAB (Joyce- April- Barney) which was an LLC for more than 6 years. Also, she was a member of the United Steelworkers, Dietary Managers Association, and visiting Nurses Association. Joyce was a member and loved attending True Church of Christ for Sinners Only led by Pastor Riley D. Medley. A loving and devoted mother and grandmother, her first love was her children then, Tray had Danielle who became the love of her life! Then, this changed when she had her first and ONLY great-grandchild, Danica Hawkins. Some of her other joys included traveling, cooking, gardening, and the games on Facebook. Her many cruises and traveling took her around the world with her beloved Aunt Polly. Also, she welcomed the love of her dogs and all of her adopted fur babies. She expressed her love and was respected and loved by anyone who met her. Joyce leaves to mourn her two children, Tray Bernard Brown (Monica) of Churchton, MD, and April Denise Brown of Laurel, MD; one daughter-in-law, Monica Lee Brown; ONE and ONLY grandchild, Danielle Joniece Brown of Annapolis, MD; and ONE and ONLY great-grandchild, Danica Torec Hawkins, goddaughters Lakeva Johnson and Lakisa Crosby ( Brandan). Three sisters, Dorothy (Jennet) Jones, Nancy Russ (William), and Linda Robinson; two brothers, Francis “Vanny” Sharps (Helen) and Mac Author Johnson (Evelyn), Sister in law Shirl Johnson and Beverly Johnson. Devoted friends, Mary Wilson, Cousin, Gale Greenleaf, Nancy Brown Johnson, Delroy Lesley, Ms. Gladys Matthews, Deena Joyce, Dr. Thelma Thompson, and Dr. Lisa Thompson; with a host of nieces and nephews, many cousins, in-laws, and friends. Three special friends- Reginald Gladden, Reginald McKinnon, and Elaine Poteat. Joyce is preceded in death by her parents, George Leon “Daddy Lee” and Mary Catherine “Mamie” Johnson; her brothers, Marshall “Butch” Johnson and Leon “Elroy” Johnson, her sister, Sherri Ann Johnson; and her Fur babies, Sharbay Brown, Buster Brown, and Bambie Brown are all in heaven waiting on her arrival. In lieu of flowers, donations may be sent to the “Danica Hawkins Scholarship Fund” at 3523 New Sudlersville, Laurel, MD 20724.

The family of Joyce Geneva Brown created this Life Tributes page to make it easy to share your memories.