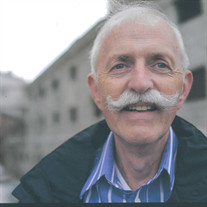 Joseph Bruce Flint passed away Tuesday December 3rd, 2019 at Anne Arundel Medical Center after his 4th battle with cancer. He leaves behind his wife Minnie, his sons Christopher and Steven, brothers Larry, Leroy and Dennis, and sisters Margaret, Emoline, Mary, Doris, and Helen, as well as 15 godchildren and numerous nieces and nephews. Joe was born on March 10, 1952 in Woodhull, NY, the son of Burdell and Doris (Baker) Flint. At the time of his passing, Joe lived in Odenton Maryland, 10 minutes away from his job of 40 years at the National Security Agency, with Minnie, Steve and his dog Lacey. In his early years, Joe held many odd jobs including delivering papers, working for John Symonds in the Feed Mill in Woodhull, trimming Christmas trees, Ingersoll Rand, Marion Rohr, and USAF Reserves. Joe was also an avid member of the Boy Scouts of America during his childhood and both the Cub Scouts of America and Boy Scouts with his two sons. Joe was a proud veteran having enlisted in the Air Force in March 1975, serving first in San Angelo, Texas, and then in Fort Meade, Maryland. Immediately after serving and while still in the reserves, Joe was a postman in Laurel, Maryland for about 4 years before starting his career at the NSA. The most important thing in Joe's life was family. He coached every sport his sons played at one time or another, he was a Den and Pack leader for Cub Scout Pack 411 in Lanham Maryland with his sons, and he never missed any of his sons' activities, or any chance to be a Dad. He also did his best to be a father figure to any and all children, no matter what. Joe loved all children the same way he loved his own. In addition to his wife and sons, Joe loved and cherished his extended family in New York, especially his brothers and sisters. He would light up when the family visited Woodhull for Christmas or the summer time cook off, and he valued his relationships with every member of the family from his surviving Aunts and Uncles all the way to distant cousins, nieces or nephews. Joe was known as the type of man who would do anything for family. He made it a point to visit each of his brothers and sisters every time he visited. On many occasions, he also opened his heart and home to friends and family to help them through difficult times. Joe was beloved by so many people, his family is still learning how much he meant to people even after his passing. Joe had many hobbies, including gardening, hunting, cooking and coin collecting. Joe also did his best to open himself up to and accept his wife Minnie's Filipino culture and family. Many in the local Filipino community considered Joe an honorary Filipino, and as he was known to do, Joe viewed them as extended family. Joe never met a group of people he couldn't become family with. In lieu of flowers, donations may be made to Operation Smile (operationsmile.org/donate)

The family of Joseph Bruce Flint created this Life Tributes page to make it easy to share your memories.

Send flowers to the Flint family.