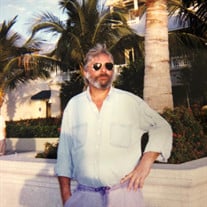 Johnny Manuel Gramatikos of Annapolis, MD, passed away peacefully at his home surrounded by family on Wednesday April 14, 2021. He was 71 years old. Johnny grew up in Takoma Park, MD, in a large and very close-knit Greek family. He graduated from Northwestern High School and worked at The Catholic University of America for 39 years. Johnny loved his family and friends and was very fond of animals, particularly his rescued Cairn terriers. He loved the beach and spent many family vacations on the Carolina shores. In his retirement, he was addicted to crossword puzzles and watching Perry Mason and Westerns. He also was an avid reader, particularly Lee Childs books. Johnny was a man of great kindness, intelligence, energy, and honor. He will be greatly missed by all that had the privilege of knowing him. Johnny was preceded in death by his parents, Michael and Mandy Gramatikos, his sisters, Irene Schakowski and Bessie Connor, and brother Michael Gramatikos. Johnny is survived by his loving wife of 43 years, Ava Avrunin Gramatikos, daughter Aleena Gramatikos and partner Hans Heidle of Falls Church, VA, son Steven Gramatikos of Pasadena, MD, and his Cairn terrier Miranda; his siblings Joann Fitzgerald and partner Ken Noyes of Little River, SC, Manuel Gramatikos of North Ridgeville, Ohio, Effie Leonard and husband Orion of Hague, VA, Niki Billings and husband Paul of Chase City, VA, Michele Lee and husband Butch of Amherst, Ohio, Michael Gramatikos Jr. of Hague, VA; his sister in law, Marcia Avrunin and partner Stephanie Glover of Columbia, MD; and numerous nieces and nephews and their families. An event to celebrate his life will be arranged at a later date. In lieu of flowers, please consider a donation to Col. Potter Cairn Rescue Network (cairnrescue.com).

Johnny Manuel Gramatikos of Annapolis, MD, passed away peacefully at his home surrounded by family on Wednesday April 14, 2021. He was 71 years old. Johnny grew up in Takoma Park, MD, in a large and very close-knit Greek family. He graduated... View Obituary & Service Information

The family of Johnny Manuel Gramatikos created this Life Tributes page to make it easy to share your memories.