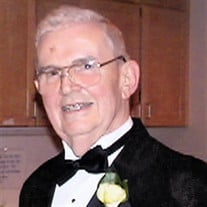 John “Jack” Prendergast of Annapolis passed away peacefully on June 13, 2021. Born on August 1, 1928, in Providence, Rhode Island, he graduated in 1944 from LaSalle Academy and Providence College in 1948. From 1950 to 1955 Jack proudly served his country in the US Navy as a Surface Warfare Officer aboard the USS HERBERT J. THOMAS (DD-833), which included combat tours off the coast of Korea during the conflict there. Upon leaving active duty, he went to work of Universal Atlas Cement (a Division of US Steel) and he remained with that company for 26 years, before switching careers to work for Mutual of New York. In addition, he continued to serve the nation in the Naval Reserve for over 20 years, rising to the rank of Commander. In June of 1955, he married the love of his life, Elizabeth “Betty” Jackson, and they lovingly raised six children. He is preceded in death by Betty, as well as his sister, Jean. He is survived by his six children John (Mary Ellen), Michael (Kelly), Anne (David) Thayer, Mary Jean (Paul) Schaffer, Teresa (Neil) Anderson and Kathleen (Mark) Slusar. He was blessed with fourteen grandchildren (John, Brian, Mark, Thomas, Elizabeth, Kevin, Stephen, Alexander, Natalie, Riley, Katherine, Matthew, Margaret and Anna) as well as five great-grandchildren. Jack and Betty were avid bridge players, and Jack was active in both St. Margaret’s and St. Mary’s choirs. Most recently, Jack was a member of the Heritage Harbor Chorus until the COVID pandemic cut short his involvement at the age of 91. His other great love was Notre Dame football, and he was infamous for yelling at the TV on football Saturdays. A Celebration of Life Mass will be held at St. John Neumann Mission Church in Annapolis on Saturday, June 19 at 10:30 AM. There will be a brief reception to follow in Seelos Hall adjacent to the church. In lieu of flowers, donations can be made to Catholic Charities (catholiccharitiesusa.org) or Hospice of the Chesapeake (hospicechesapeake.org.

The family of John Joseph Prendergast Jr. created this Life Tributes page to make it easy to share your memories.

John “Jack” Prendergast of Annapolis passed away peacefully on...