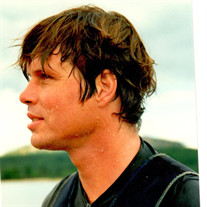 John Bradford Kicklighter was born on March 1, 1955 at the Marine Corps Air Station, Cherry Point, North Carolina to the late Lorene Claire Kicklighter and Edward Clyde Kicklighter. John is survived by his brother Tom and his wife Cheri, and many cousins. John began his eternal journey on November 7, 2020. He was nurtured, educated and played in Annapolis, Maryland enjoying the ocean and music venues in the Baltimore - Washington region while attending local private and public schools. He attended schools in Paris France, as well as Annapolis High, Severn school, Saint Mary’s college of Maryland and Bowie State university earning his Bachelor’s and Master’s degrees in Education. John’s occupations of giving were as a musician and teacher of science. Music was his favorite pursuit and he played in many bands before branching out on his own. A few of the music venues were, College Park, “The Back Door”, 49 West Coffee house, The Moon Café, YMCA and the Elks club in addition to a number of venues on the West coast. John played the guitar (acoustic and electric) piano, organ, synthesizer and mixing sound. An excerpt in The Baltimore Sun news describes his style and back ground: “Kicklighter, a native of Annapolis, uses the name Presence for his solo act. He's played in a number of rock bands and hoped to make it big in the music industry. He calls his current works "ambient world music," based on music from different cultures and rhythms that occur within nature.” "I played in a lot of different bands; I started going out on my own, and I didn't want to be influenced by others," he said. "I kept the name Presence because of my progressive style." John enjoyed sports as a youth and excelled in swimming, participating on the Junior Olympic swim team specializing in the Butterfly and breaststroke. He enjoyed the ocean, beach, sun, travel, spiritual exploration, evolving, friendships and family. Languages: English and French. Special Thanks go out to Lily Poy for her everlasting guidance and support, Lo Hamm for her unwavering friendship, The Unitarian universalist church and Annapolis Friends meetings. “The Journey continues” By an Unknown Author When I come to the end of the road And the sun has set for me, I want no rites in a gloom-filled room, Why cry for a soul set free! Miss me a little – but not for long And not with your head bowed low. Remember the love that we once shared, Miss me, but let me go. For this journey that we all must take And each must go alone; It’s all a part of the Master’s plan A step on the road to home. When you are lonely and sick at heart Go to the friends we know, And bury your sorrows in doing good deeds. Miss me, but let me go.

John Bradford Kicklighter was born on March 1, 1955 at the Marine Corps Air Station, Cherry Point, North Carolina to the late Lorene Claire Kicklighter and Edward Clyde Kicklighter. John is survived by his brother Tom and his wife Cheri, and... View Obituary & Service Information

The family of John Bradford Kicklighter created this Life Tributes page to make it easy to share your memories.

John Bradford Kicklighter was born on March 1, 1955 at the Marine...