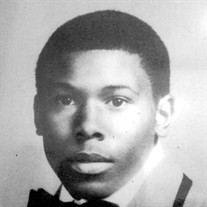 John Wesley Jones, affectionately known as Johnny, was born February 26, 1956 in Baltimore, Maryland, to the late Thomas Matthew Jones and Marian Elizabeth Johnson. Johnny departed this life on Saturday, November 27, 2021, in Tracy's Landing, Maryland. Johnny received his education in the Anne Arundel County Public School System. He attended Southern Senior High School in Harwood, Maryland, and graduated with the class of 1975. Johnny was a member of the wrestling team from 1972 to 1975. In 1975, Johnny led his team to victory winning the State Championship, weighing in at 119 pounds. After graduating, Johnny began his career working for the Maryland State Highway Administration (MSHA). After leaving the MSHA, Johnny began working in his community lending a helping hand to seniors. His community became his extended family who showed much love for his kind deeds. Johnny enjoyed hunting, fishing, and crabbing. He also enjoyed spending time with family and friends, and watching The Washington Football Team. Johnny was very fond of his nieces and nephews. He always had extra change in his pocket when they needed it. Johnny was preceded in death by his parents Thomas Jones and Marian Johnson; and brothers William and Thomas Jones. Johnny is survived by his brothers Calvin (Josephine), and David; sisters Frances, Mattie, Mildred (Levi) and Edna (John). Two uncles, John and Melvin Jones, anda host of nieces, nephews, cousins and friends. Johnny also leaves to cherish his memories five devoted friends, Vincent Cifizzari, Charles Fink, Scott Ramsey, Wayne Barnett, and John Bowen. Special thanks to the Tracy's Landing community for their many acts of kindness.

The family of John Wesley Jones created this Life Tributes page to make it easy to share your memories.

Send flowers to the Jones family.