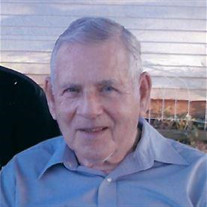 John Hilery Cox, 91, loyal husband and father, and son of Blanch Virginia (Cox) Shores (Nee Rule) and Joseph Avery Cox passed away quietly at his home with his beloved wife by his side. He his predeceased by his parents and his brother Joseph Avery Cox Jr. He is survived by his devoted and loving wife Eva May Cox (Nee Blessing) of 68 years on September 15th. Also surviving are his four children John H. Cox, Jr. (Bonnie) from Stevensville MD, Susan M Cox from Ermo SC, Denise Smith (Scott) of Annapolis, Charles W Cox from Knoxville TN, 12 grandchildren and 6 great grandchildren. As a young man, at 18 he joined the Navy and became a member of the Silent Service. During his proud 20 years, he served on the USS Chewink, USS Petrel, USS Spinax, USS Cobler, USS Cobia, USS Quilback, USS Pike, USS Gato, USS Marlin and the USS-X1 in Annapolis. He served as an electrician as a Chief Petty Officer on submarines and as an instructor on shore duty. His service and performance were described as exceptional. He was willing to sacrifice his own privileges in order to act in the best interest of the Navy and Submarine Service. After his retirement from the Navy in 1965, John worked for the county in Recreation and Parks and then became an inspector for grading and sediment control for Inspections and Permits. During his 27-year career with Anne Arundel County, he received multiple citations and meritorious awards for outstanding performance in both quantity and quality of work as well as uncompromising attitude of technical excellence, tenacity & strength and fair appraisal of problems. In his spare time throughout his life, he enjoyed driving his motor scooters, was the operator of the Zamboni machines at the Naval Academy Dahlgren Hall and Bowie ice rink as well as owned and operated a small lawn business servicing clients in Pendennis Mount. He was an avid fan of the Philadelphia Phillies, Eagles and Nascar races. He especially enjoyed watching the old TV shows of the 60s & 70s, including the black & white sitcoms McCales Navy, Gomer Pyle and Andy Griffith. He was a loyal husband and father and cherished time with his family. In lieu of flowers, donations can be made to The Hospice of the Chesapeake (90 Ritchie Highway, Pasadena MD, 21122). A celebration of life will be on Monday, September 9, 2019 at Lasting Tributes, 814 Bestgate Road, Annapolis 21401. Visitation from 12:00-1:00, Service from 1:00-2:00 followed by Military Honors at Crownsville Cemetery

John Hilery Cox, 91, loyal husband and father, and son of Blanch Virginia (Cox) Shores (Nee Rule) and Joseph Avery Cox passed away quietly at his home with his beloved wife by his side. He his predeceased by his parents and his brother Joseph... View Obituary & Service Information

The family of John Hilery Cox Sr. created this Life Tributes page to make it easy to share your memories.

Send flowers to the Cox family.