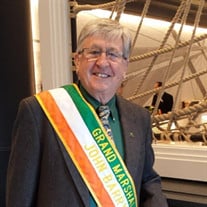 John Patrick “Sean” Barry, 82, of Annapolis passed away peacefully at home on Sunday, July 4,, 2021. A native of Currans, County Kerry, Ireland, John was born on March 15, 1939 to the late Ned Barry and Margaret Barry (nee O’Connor) and was a graduate of St. Patrick’s Secondary School, Castleisland. He immigrated to the United States on 11/11/57 and enlisted in the U.S. Army shortly thereafter. While stationed at Ft. George G. Meade, Maryland, John met & married Kathleen Cooleen and together they had 5 children: Margaret McLemore (Brian), Theresa (Don Coffey), Eamon, Sean (Michelle), and Kevin (Louise). John is survived by his brother Eamon Barry of Dublin, Ireland, a sister, Joan Harriss of Chicago, Illinois, 10 grandchildren, a great-grandson, and many nieces & nephews. He was predeceased by his second wife Carole McNally Barry, his son Eamon and his daughter in law, Michelle Mathews Barry. For 10 years he proudly served as a Washington, D.C. Firefighter, and for 20 years following he was the proprietor of five Irish pubs & restaurants in DC and Maryland, where he developed his signature rendition of “Patsy Fagan”. He embraced the Irish-American community and supported countless Irish cultural, athletic, charitable and fraternal clubs & events throughout the region. He served as President of the Washington, D.C. Irish American Club, and as a founder of the D.C. and Gaithersburg St. Patrick’s Day parades. His contributions to the Washington and Maryland Irish were recognized by commendations from the Governor of Maryland, the Mayor of Ocean City, the Police & Fire Emerald Societies, the Gaelic Athletic Association, and the many charitable organizations who benefited from the various events hosted in his restaurants. He was also honored as Division Marshal for the Washington, D.C. St Patrick’s Day Parade, Grand Marshal for the Annapolis St Patrick’s Parade (twice) and Grand Marshal for the Gaithersburg St Patrick’s Day Parade. John enjoyed reading, story-telling, gardening, birding, was an avid golfer, and earned a gold medal in table tennis in the Maryland Senior Games. John retired to Ocean City and then Annapolis, where he continued to enjoy occasional work in the hospitality industry, most notably at the Marlin Moon Grille and with the Annapolis Visitors Bureau. A celebration of his life will be held at a later date. In lieu of flowers contributions may be made to Paralyzed Veterans of America or another Veterans Assistance organization of your choice.

The family of John Patrick Barry created this Life Tributes page to make it easy to share your memories.

Send flowers to the Barry family.