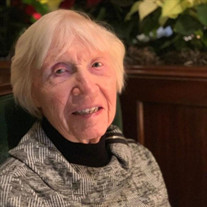 Joan Silver lost her life on January 26, 2021 just before midnight, surrounded by her loved ones at her daughter’s house in Severna Park, MD. She was 93. Joan was born September 15th, 1927 and raised in Greenville, Pennsylvania. Soon, she was joined by her sister Audrey and her brother Woody. The three of them were very close and remained that way their entire lives. Joan attended Mount Vernon Academy in Ohio and graduated in the class of 1946. Attending this boarding school made a profound impact on her life and she remained close, throughout her life, to the many friends she experienced during this period. Joan moved to the Washington D.C. area in the late 40’s, began college and worked part-time at the Pentagon where she met her future husband, Nehemiah (Nick) Silver, an attorney. Nehemiah and Joan had three children together; Stephen, Valerie and Bethany. They eventually settled in Takoma Park, Maryland where she lived in the same house for 60 years. While raising three kids, Joan decided to go back to school and completed her undergraduate studies at Washington Adventist University, formerly Columbia Union College, and completed her graduate studies at the University of Maryland earning her master’s degree in education. She worked for the Prince George’s County school system as a teacher for special needs students. After she retired from education, she worked actively at the Washington Adventist Hospital for over 10 years in the medical staff office credentialing physicians. Joan’s life was not defined by her education or her work. She was a humanitarian with a profound love of life and others. She was raised as a Christian and was a member of the Sligo Seventh Day Adventist Church. Joan had a dynamic personality. She was very compassionate, always helping others, adventurous and had a global perspective. After the death of her husband, when she was 50, and the children were grown, her home was always open to those in need. Joan also went on several missionary trips, including Thailand, Brazil, and Tanzania. She was also fortunate enough to add two son-in-laws, Frits DeGoede and Sam Ellis, and a daughter-in-law, Nancy Silver, to her family. She always said she was lucky that her children married up! Joan’s daughter Valerie lost her life on 9/11, during the attack on the World Trade Center. The loss of Valerie was devastating for the whole family, but no one more than Joan. Her faith and trust in God pulled her through this very dark period. In memory of her daughter, she and her son-in-law Sam built a house as part of an orphanage in Tanzania. Joan, Sam, her children and grandchildren all traveled to Africa to participate in the construction of the home and its dedication. Joan had a communication style that was warm and engaging. She was charismatic and her personality was radiant. To know her was to love her. Joan was selfless. She cared for everyone, no matter their station in life, race, or religion. She was always positive, had a smile on her face and a vibrant laugh. She never got up on the wrong side of the bed. Joan always looked at the bright side. She loved children. She would always seek the opportunity to tell them stories or sing them songs. Her grandchildren, Casey, Jonathan, Nicole, Luke and Nathan and grandnieces, Shelly and Shannon, meant everything to her. One could not readily tell how old she was because of her extreme energy and active life. In her 80s, when she went to the beach, she would stop at the lifeguard stand to tell the lifeguard to watch her because she was about to ride the waves. At the age of 90, she climbed on the back of a jet ski so she could enjoy the excitement of the ride. Most of all, Christianity and the love of God were in her DNA and the primary focus of her life. Her belief in God was based more on a matter of fact than faith. Her beliefs were absolute and the solid bedrock of her existence.

Joan Silver lost her life on January 26, 2021 just before midnight, surrounded by her loved ones at her daughter&#8217;s house in Severna Park, MD. She was 93. Joan was born September 15th, 1927 and raised in Greenville, Pennsylvania. Soon,... View Obituary & Service Information

The family of Joan Pangborn Silver created this Life Tributes page to make it easy to share your memories.

Send flowers to the Silver family.