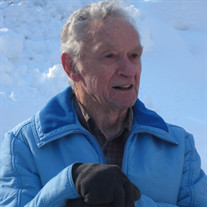 James Leroy Brown of Upper Marlboro, Maryland, died on March 14, some two months shy of his 99th birthday. The twelfth of fourteen children born to Ivan and Alta Royer Brown, James (Jim) spent most of his childhood in and around Lantz, Maryland where he was born, an area he referred to as “the mountain.” He graduated from Thurmont High School in 1939 and began his 68-year marriage to Betty Frazer Brown in 1941. He was a machinist in the US Navy, serving on a destroyer escort in the South Pacific during World War II. A few years after the war he and his growing family moved to the Washington area where he began his career in construction, advancing from laborer to carpenter, to foreman, to contractor with his own business. He built houses in Charles, Anne Arundel, and, mostly, Prince Georges County, where, with help from friends, he built the house in Ritchie where he and his family lived for almost thirty years. Together with Betty, Jim took up downhill skiing in middle age, and the two traveled widely in North America and Europe, later, sometimes accompanied by grandchildren. They also enjoyed dancing, especially at Pen Mar Park, for they maintained close ties to the people and “the mountain” where they grew up. Jim was unpretentious, upbeat, self-effacing, generous, and blessed with a wry sense of humor. He was also spry and determinably self-reliant -- “ornery” he might say – splitting his own firewood well into his last decade. After Betty’s death in 2010 he lived on his own in his house of thirty+ years until family members came to stay with him a few months ago. Recent birthday and holiday gatherings at his home brought together five generations of the family of which he was patriarch. Jim became an avid reader in later years, reading nearly 2,000 books in his 90's. In his last few months he participated enthusiastically in Facetime, Skype and Zoom conversations so as to maintain connections with family members. Jim is survived and will be sorely missed by a son, James (Jimmie) Brown of Boonsboro, Maryland and Los Angeles, California, daughters Carolyn Harrington of Silver Spring, Maryland and Brenda Brown of Winnipeg, Manitoba, and five grandchildren, three great-grandchildren, and two great-great-grandchildren. A memorial service will be held at Germantown Bethel Cemetery in Cascade, Maryland when people can gather together safely.

James Leroy Brown of Upper Marlboro, Maryland, died on March 14, some two months shy of his 99th birthday. The twelfth of fourteen children born to Ivan and Alta Royer Brown, James (Jim) spent most of his childhood in and around Lantz, Maryland... View Obituary & Service Information

The family of Jim Brown created this Life Tributes page to make it easy to share your memories.