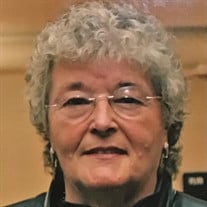 As a born and bred Depression-era New Englander, full Scot, US Marine, Jean S. Peckham (92) of Davidsonville, formerly of Weymouth, MA, was admired for her hard work, diligence, patience, and grace. She was also noted for her will, persistence, and just plain stubbornness, finally surrendering in her fight against Parkinson’s on December 22, 2021. As the second daughter of Annie T. and Thomas B. Waddell, both Scottish emigres, she was born July 19, 1929, and raised in Revere, MA. She sang in school and church choirs and was a member of Rainbow and later Eastern Star. After high school she graduated from the the Burdette Business School in Boston. In August 1950 she met a handsome guy at a USO dance, but she was activated and inducted into the US Marines only a few weeks later. Letters flew, and she and James Peckham tied the knot only five months later in January 1951. Following her honorary discharge from the Marines and Jim’s from the Army, they moved moved in with Jim’s family in Braintree, MA. Jean worked as a waitress at Dreamwold and then worked for Supreme Mkts. When Jim became the athletic director at Emerson College, she went in for “a few months” to help organize the office. Together, they became the Athletic Department for the next 24 years. Jean was also the advisor for the Sigma Kappa Chi sorority. When duties as a national, international, or Olympic wrestling coach called Jim out of the office, Jean held down the fort, knowing the names and numbers of all who worked the athletic wheels. Jean and Jim were a team, and when they retired, Emerson had to hire five people to do what they did. During those years Jean and Jim also ran the “Earning the Right to Win” wrestling camp at their home in Weymouth, MA. For 10 weeks each summer, Jim could be heard from the garage/gym yelling instructions to the 16 young men, along with a few coaches, who lived there each week. Jean made the three-a-day meals for each weekly group. She was also their medic, comfort, and confidant. She was gracious and warm in welcoming those wrestlers each summer and in opening their home to others, all who stopped to talk to Coach, and the few brought home as additions to the family, especially Rod Buttry. Jean could, obviously, cook for a crowd. She fed untold numbers at gatherings and cookouts for Emerson athletes, students, administrators at Weymouth and the “camp” they built in NH, along with intimate dinners and cocktails for family and friends. During their 60+ years of marriage, Jean and Jim did family vacations to Cape Cod, VT, ME, Canada with his family, then their children, and most with with his sister and her family. After retirement Jean and Jim expanded their travel: China, South Korea, Egypt and Crete through Greece and France, driving in their Lance camper cross country to Alaska and back, Scotland with their daughter, trips to MD and NY to see grandchildren, and lots of holidays with family gathered at the camp. After Jim passed, she moved to Davidsonville. During her free time Jean enjoyed a good murder mystery, tv law/crime shows, a tough crossword, and birds at her feeders. She loved to dance and looked like the queen she was when attending formal Emerson functions. She was strong, hard-working, dedicated, not afraid of a challenge, beautiful, quiet, thorough, warm, charming. Jean was preceded in death by both her parents, her sister Margaret, in-laws Alex and Clevelyn and their son Bruce, sister-in-law Janet Stitt, and by the love of her life, Jim. Survivors of beautiful memories include daughter Diana (Barry Sullivan) of Danbury, NH, and son Matthew (Carolyn Charney) of Howard Beach, NY. The grandchildren who will miss her are Alexandra Reynolds (Matt), Belchertown, MA; Sean Sullivan (Ashley), Danbury, NH; Katherine Sullivan, Annapolis, MD; and Emily Peckham, Boston, MA. Three great grands who will never know her, except by all the stories told, are Leif Sullivan, Danbury, NH, and Jack and Cara Reynolds, Belchertown, MA. Other survivors include son-of-the-heart Rod Buttry (Carol Emmanuelson); brother -in-law George Stitt, nephew George Stitt, nieces Lisa Haley (Rod) and Vicky Van Wort (Ray) and their families; and childhood friend of 89 years, Marge Sedler. Family gives special thanks to the administration and staff of Riva Terrace II and VI and Hospice nurse Abby Ludeau for their wonderful care of Jean. Following cremation, a celebration of life will be held at a future date in NH when the latest COVID wave passes. In lieu of flowers, family asks that any donations in Jean’s memory be made to the Peckham Athletic Fund, Emerson College, 150 Bolyston St., Lower Level 2, Boston, MA 02116; the Peckham Scholarship Fund, MA Wrestling Hall of Fame, c/o Rene Canezin, 36 Hyde Ave., Newton, MA 02458; or The Hospice of the Chesapeake, 90 Ritchie Hwy., Pasadena, MD 21122. Please check back at Lasting Tributes, Bestgate Rd., Annapolis, MD, for celebration details when they become available.

As a born and bred Depression-era New Englander, full Scot, US Marine, Jean S. Peckham (92) of Davidsonville, formerly of Weymouth, MA, was admired for her hard work, diligence, patience, and grace. She was also noted for her will, persistence,... View Obituary & Service Information

The family of Jean Stuart Peckham created this Life Tributes page to make it easy to share your memories.

As a born and bred Depression-era New Englander, full Scot, US...

Send flowers to the Peckham family.