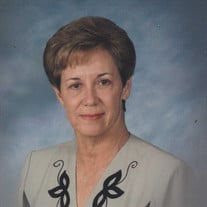 Janet Calvit Pyle, 85, of Annapolis, Maryland passed away January 14,2020 at her home, after her beloved Louisiana State University won the CFP National Championship. Jan was preceded in death by her loving husband of forty-three years, Roy Braxton Pyle Jr, and son, Roy Braxton Pyle III. Parents Maude and George Calvit, brothers, James, George, and William Calvit, and sister, Lucille Wilson. Jan was survived by her daughter, Jamie, son-in-law, Patrick, and daughter-in-law, Tamie Pyle. Jan was born in 1934 and was raised in Minden, Louisiana from humble beginnings. She graduated from Minden High School at the top of her class in 1952. In high school, Jan played basketball and was on the cheerleading squad, which sparked her love for football. After graduation, Jan attended Secretarial School where she learned short hand, which she used frequently, especially writing Christmas lists. Jan married in 1954 and worked at a law firm while her husband, R.B., attended Louisiana State University and later graduated with a degree in Electrical Engineering. R.B. landed a job in Maryland where he worked at Westinghouse for over thirty years. Jan was a stay at home mom to son, Braxton, and daughter, Jamie, where she loved nothing more than taking care of and raising her family. For two years the Pyle family lived in Chester, England and traveled to most of Europe. The family later moved back to Maryland into a new home where they lived for the next twenty-five years. Jan and R.B., made life-long friends with neighbors and had parties for every occasion. Jan enjoyed being a grandmother to seven grandchildren, and a great-grandmother to six great-grandchildren. After retiring, Jan and R.B., moved to Dunnellon, Florida and built their dream house. R.B. enjoyed playing golf and fishing, while Jan danced with the Rainbow Strutters, a local dance group that performed at Senior Centers. They made countless friends and thoroughly enjoyed their time in Florida. R.B. passed away in 1997 and a few years later, Jan returned to Annapolis, Maryland to be with family and live out the rest of her life. Jan was an avid reader, always had a puzzle book, wrote poems on occasion, shared her sewing and crocheting skills with family, as well as always rooting for the Tigers!

Janet Calvit Pyle, 85, of Annapolis, Maryland passed away January 14,2020 at her home, after her beloved Louisiana State University won the CFP National Championship. Jan was preceded in death by her loving husband of forty-three years, Roy... View Obituary & Service Information

The family of Janet C. Pyle created this Life Tributes page to make it easy to share your memories.

Send flowers to the Pyle family.