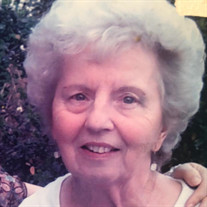 Janet Lorraine Brady-Argent of Davidsonville, MD passed away on September 24th, 2020 surrounded by her loving family, peacefully in her home after many years of battling Parkinson’s Disease. Born April 26th, 1940 in Glenn Dale, MD, she was the daughter of the late Martha Duley-Turner and Jesse Brady. She is preceded by her sister Ann Brady (Bishop) and survived by her beloved brothers Donald and Gene Brady. Janet was a graduate of Bladensburg High school, Class of 1958. As quoted in her 1958 highschool yearbook, she should be remembered as “pretty to walk with and witty to talk with.” She met her loving husband, Lee Argent, and married in 1960. They moved to Davidsonville, MD in 1972 where they raised their family and established and enjoyed their blessed farm life. She was employed by the US Department of Customs as a young adult, and after moving to Davidsonville, MD she became a bus driver for the Holy Trinity Church of Bowie for a short time until she established her career as a secretary for the Anne Arundel County Board of Education and later with Davidsonville Elementary where she worked until her well-deserved retirement. Janet was a devout christian and an active member at Davidsonville United Methodist Church where she taught Sunday school, sang in the choir, and made many loyal friendships that survive her memory. Janet loved her farm and all the animals that come with it. She was an established equestrian with an admiration for Tennessee Walking horses and participated in many parades and fairground events in her adult life. In addition to her love of horses, Janet was passionate about music. As a part of multiple bluegrass bands, the Shady Side Sour Notes and the Chesapeake Pickers, where she was a singer and guitar player with her husband Lee and other band members that shared their joy of music with any crowd that would listen. Above all of these wonderful things, she was a devoted wife, mother, aunt, grandmother, and great grandmother to her family and a strong-willed, kind-hearted, open-ear to any who needed it. Janet is survived by her husband, Leonard A. Argent, after 60 beautiful years of marriage, her daughter Lorrie and son-in-law John Shymansky and son Allen and daughter-in-law Julie Argent, her grandchildren John, Tyler, Brady, Jenna, Matthew and great-grandchildren Callie, Carter, Kynlee, and Aurora. A family celebration of life will be held at a later date. At this time, condolences can be best shared through donations to the Parkinson’s Organization at https://www.parkinson.org

Janet Lorraine Brady-Argent of Davidsonville, MD passed away on September 24th, 2020 surrounded by her loving family, peacefully in her home after many years of battling Parkinson&#8217;s Disease. Born April 26th, 1940 in Glenn Dale, MD, she... View Obituary & Service Information

The family of Janet Lorraine Argent created this Life Tributes page to make it easy to share your memories.

Send flowers to the Argent family.