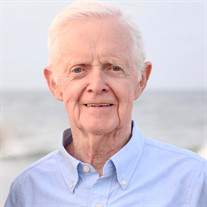 James Aloysius Riley (Lt. Colonel- Ret) 81, decorated Vietnam War veteran, beloved husband and father, passed away Tuesday, June 23, 2020. Jim will be remembered as a loving husband and devoted father who loved God and serving his country. He was a resident of Annapolis and formerly resided in Columbia and Odenton, Md. He was born in Youngstown, OH on January 26,1939, and was the youngest son of the late Anne Lynch Riley & William Edgar Riley. He attended Saint Dominic School (‘53) and Ursuline High School (‘57). Jim attended Youngstown State University (‘61) where he was a member of the ROTC program. He graduated with a degree in Advertising and entered the U.S. Army, completed jump school and was then stationed with the 1st Battalion, 27th Infantry Regiment (Wolfhounds), 25th Infantry Division at Schofield Barracks, Hawaii. As a young Second Lieutenant, Jim went with the Wolfhounds to Thailand for four months on extended maneuvers in 1962. In 1963 he transferred to Quartermaster Corp and moved to Ft. Shafter, Hawaii. He met and married his wife Jane Kurkjian, in 1964. Together they raised three daughters. He served two combat tours in Vietnam - Cam Ranh Bay, 1967-68 and IV Corp as an Advisor 1970-71 and was awarded several distinguished medals including the Bronze Star Medal with OLC and additional commendations recognizing his service. During his Army career, his assignments included: Ft. Lee, VA; Ft. Hood & Killeen Base, TX; Nurnberg & Ludwigsburg, Germany; and Ft. Meade, MD. Upon leaving active duty in 1975, Jim joined the 310th Theater Army Command Reserve Center at Ft Belvoir, VA and was promoted to Lt. Colonel before retiring from the Reserves in 1991. After leaving active duty in 1975, Jim joined the Motorcycle Safety Foundation and facilitated Motorcycle Rider Education Courses for military installations across the U.S. until 1994. He joined Origene Technologies, Rockville, MD as Vice President and ultimately retired in 1999. He enjoyed traveling with Jane throughout the USA and cruising with friends. He had a witty sense of humor and loved to dance to classic songs. He also enjoyed attending church and spending time with his grandchildren, friends and family. Along with his wife, Jane (Kurkjian) Riley, of 56-years, Jim is survived by three daughters and their spouses: Colleen (Rich) Prengaman, Severna Park, MD; Diane (Doug) Brown of Rehoboth Beach, DE; and Heather (Chris) Ward of Bryn Mawr, PA. He was also the beloved grandfather to 10 grandchildren, Haley, Reece, Chase, Tucker, Mason, Flynn, Colin, Trent, Bridget and Torin. Jim was preceded in death by his parents and siblings Patricia Ann McCormack, William Riley and grandson Trent (2010). In lieu of flowers, memorial donations may be made to The Alzheimer’s Association, 1850 York Road, Suite D, Timonium, MD 21093. A Memorial Mass at Sacred Heart Church and interment will take place with full military honors at Arlington National Cemetery at a later date.

The family of James Aloysius Riley created this Life Tributes page to make it easy to share your memories.