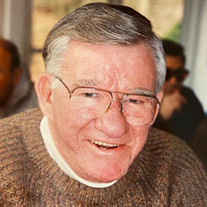 James E. Quinn passed away peacefully August 28, 2021, surrounded by family and friends. Jim was born in New Haven, Connecticut, September 14, 1930, and spent his childhood in Connecticut. After graduating Hamden High School, Jim enlisted in the United States Air Force where he served from 1950-1954. During his service, he was a crew member on B-29s in the Korean War and flew 30 combat missions. He was awarded the Air Medal Service. In April 1953, Jim married the love of his life, Arlita (Kenny) Quinn. Together they had six children, eight grandchildren, and eight great grandchildren. Jim joined IBM as a Custom Engineer in 1956. His tenure with IBM took the family from Connecticut, to New York, then Minnesota, and retiring in the Annapolis, Maryland Area. He retired from IBM in 1989. He then joined the Siemens Corporation as a Service Branch Manager until 1996 when he retired to a life of leisure and travel. Jim and Arlita traveled to Ireland frequently as well as, Italy, Holland, Canada and many areas within the United States. If you didn’t find him on the golf course, you would find him sailing the Chesapeake waterway. He was the Commodore for the Magothy River Sailing Association, and a member of various sailing clubs in the area. He also spent years at the Chesapeake Curling Club and was an active member of the American Legion. He was an active community member in Severna Park and Heritage Harbor, where served he on many different boards. Jim was preceded in death by his loving wife Arlita, brother Bobby, and sisters Betty and Eleanor. He survived by his children James (Chris Zhang), Doreen (Rick Tiffany), Keith (Cathy Quinn), Tom (Carole Quinn), Kevin, and Patti-Ann (Peter Sprogeris), grandchildren, great grandchildren, and several nieces and nephews.

The family of James E. Quinn created this Life Tributes page to make it easy to share your memories.

Send flowers to the Quinn family.