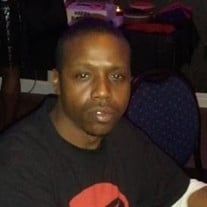 James Earl Perkins El affectionately known as “Batman” was born February 25, 1972 in Baltimore, MD to the late Nathaniel Perkins and Judith Johnson Bey. He entered into eternal rest on Sunday May 10, 2020. Batman was educated in Baltimore City Public Schools. He also attended Job Corp Woodstock, where he perfected the trade of an electrician. For the last 20 years, he was employed at Chesapeake Coating Inc. as a Powder Coater. He enjoyed working and his co-workers have become a part of his extended family. Batman loved spending time with children, and every Halloween, he made sure he took them trick or treating. His sense of humor was contagious and everyone that he came in contact with, he made them laugh. Every time he smiled you definitely noticed those dimples. He was an amazing brother and was the family’s peace-keeper. He always moved in silence. One moment he would be there and the next he had disappeared. You never knew when he would reappear, he would just show up. He was very creative and would show his skills through his art. He enjoyed rapping and dancing too. He was preceded in death by his brother, Donald Perkins. He leaves to cherish his memory: wife, Rochelle (Moula), children, Tykeera Perkins-El, Keishonna Lomax, Keilara Jones, Shamal Newman-Perkins, and Jarante Perkins El; sisters, Shelia Perkins, La’Vesta Price-Bey, Christina Perkins and Patricia Martin-El; brothers, Alfred Summerville (Ayanna), Rico Martin (Shantell) and Ephraim Martin El; grandchildren, Skylar Short, Shyheim Newman, Gracee and Keith Lomax; and a host of family and friends. He was a great man and will be greatly missed by his family, friends and all that knew him.

James Earl Perkins El affectionately known as &#8220;Batman&#8221; was born February 25, 1972 in Baltimore, MD to the late Nathaniel Perkins and Judith Johnson Bey. He entered into eternal rest on Sunday May 10, 2020. Batman was educated in... View Obituary & Service Information

The family of James Earl Perkins El created this Life Tributes page to make it easy to share your memories.