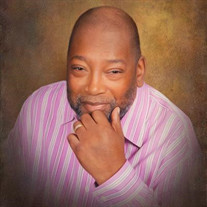 James Henry Henderson, Jr., son of the late James H. Henderson, Sr., and Anna Henderson was born on March 02, 1953. On January 1, 2021, God dispatched angels to guide his soul, peacefully, from life to eternal rest in glory! Boo, as he was affectionately... View Obituary & Service Information

The family of James Henderson Jr. created this Life Tributes page to make it easy to share your memories.

Send flowers to the Henderson family.