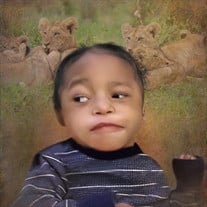 Jakari Nyree Yates, 9, son of Shanika and Kevin Coles, was born in Baltimore, MD on September 5, 2012. He entered into eternal rest on May 5, 2022. He received his education in the Anne Arundel County Public School System for special needs. At birth, he was diagnosed with a rare disease known as DiGeorge Syndrome. Six months after his birth, the doctors counted him out but as you can see, God had another plan and blessed us to have him for nine years. Jakari has always been very strong. In 2014 he was sent to the hospital and the family was told once again that he would not make it, but Jakari fought back. After a few days off the ventilator, he was breathing on his own and able to return home. He always had a strong fist. Although he was unable to verbally communicate, he would squeeze your hand tight and smile. If he did not like something, he would roll his eyes. Jakari enjoyed watching Disney movies and listening to soft music. Our hearts find comfort that he is being loved on and spoiled by his grandparents and his great grandma in Zion. We thank him for being an example of true strength to his family. Jakari’s memories will be cherished by his parents--Shanika and Kevin Coles, sisters--Ja’Lynn Yates, Miracle Dorsey and Sincere Watkins, brothers--JaDain Yates, Edward Glen 6th, Khalil and Kevon Coles, aunt--Keyora Butler, grandfather--Tyrone Blake, grandmother -- Carolyn Hubbard, great aunts-- Regina Arnold and Dana Harrison, great uncles--George, Glenn, James Harrison, cousins-- DaShawn and Daliyah Sherwood, Brittany Johnson, Lamar Pitts, and Veronica Harrison, and a host of other relatives and friends. He was preceded in death by his grandparents—April Harrison-Blake and Carl Butler, great grandparents--George and Roberta Harrison and George and Eleanor Butler. The family will not have a repast.

Jakari Nyree Yates, 9, son of Shanika and Kevin Coles, was born in Baltimore, MD on September 5, 2012. He entered into eternal rest on May 5, 2022. He received his education in the Anne Arundel County Public School System for special needs. At... View Obituary & Service Information

The family of Jakari Nyree Yates created this Life Tributes page to make it easy to share your memories.

Send flowers to the Yates family.