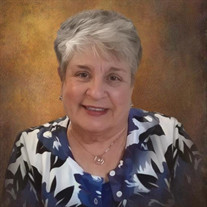 Jacqueline Harden Janovsky “Jackie” died at the age 77 from pancreatic cancer on Friday, December 3, 2021 at 6:40 am while being cared for at her home of 50 years in Hillsmere Shores, located in Annapolis, Maryland by her loving family. Jackie was the oldest child of James Walter and Loretta Winnifred (Winnie) Harden born on April 8, 1944 in Washington DC. Her younger brother, James (Jim) Walter Harden, Jr. was born on July 12, 1945 who also lost his fight to pancreatic cancer six years ago. Jackie attended Annapolis High School graduating in 1962. She attended Western Maryland (now known as McDaniel College) acquiring her Bachelor of Art’s Degree in 1966. Jackie taught at Annapolis Junior High (now Annapolis Middle School) as an Art teacher and Librarian, where she met and fell in love with her husband of 52 years, Bob. Bob and Jackie were married on August 23, 1969, at St. Martin’s Lutheran Church. Jackie worked full time until she had her first daughter, Amy, in 1971. Later she returned working on the weekends at the switchboard for Woodies located in Parole. However, Jackie is best known for her creative talents with textiles and design. In the quilting world she was known for her skilled works which often won first place. While caring for her young daughters, she created her own home business, JHJDesigns, making and designing dresses for special occasions and doing alternations. Later, Jackie worked and taught part time at Cottonseed Glory in West Annapolis when her daughters were in middle and high school. Jackie found fulfillment and satisfaction working for the Anne Arundel Community College in their Lifelong Learning program teaching Seniors. She taught at both the South County and Arnold Senior Centers. Jackie served as a volunteer throughout her life. She was a Brownie and Girl Scout Leader for many years, most known for her fun overnight camping adventures which included hiding the girl’s breakfast in the trees and creating progressive patches for young females. In 1990, Jackie was asked to design and make the flags and uniforms for Annapolis High Schools Marching Band Silks. She was member of St. Martin’s and served on the Church Council and made the paraments being used at her Celebration of Life. While her daughters attended Virginia Tech, she was inducted into the Alpha Phi Sorority which both Amy and Becky were part of. Jackie had many hobbies and interests. Friends and family would describe Jackie as a gracious host and fabulous entertainer. Friends enjoyed Trivial Pursuit Nights, Facility Christmas Parties and 12th Night Dinner Parties. She was a gourmet cook who would create homemade cakes for her family birthday celebrations. She enjoyed taking care of her plant beds and gardens around their home. She was an avid reader and read all different genres, but Murder Mysteries were her favorites. She loved to research new recipes online. Her iPad wasn’t ever far from her side. She would wait for her sister-n-law, Rosemary to come visit for the weekends to binge watch TV series on BBC and Brit Box. Jackie adored all three of her grandchildren and had a very special relationship with each one of them. She is survived by her husband, Robert James Janovsky, daughters Amy Janovsky Young, Rebecca Janovsky Crosby, her son-in-law Roody Keith Crosby, her grand-daughters Whitney Brooke Crosby and Emma Violet Young and her grand-son Dylan James Young and so many other loving relatives. A funeral service and interment followed by a Celebration of Life luncheon will be held on Thursday, December 16, 2021 at 11 am at St. Martin’s Lutheran Church. In lieu of flowers, family and friends are invited to make a donation to Hospice of the Chesapeake by visiting: https://www.hospicechesapeake.org/giving/

Jacqueline Harden Janovsky &#8220;Jackie&#8221; died at the age 77 from pancreatic cancer on Friday, December 3, 2021 at 6:40 am while being cared for at her home of 50 years in Hillsmere Shores, located in Annapolis, Maryland by her loving... View Obituary & Service Information

The family of Jacqueline Harden Janovsky created this Life Tributes page to make it easy to share your memories.

Jacqueline Harden Janovsky “Jackie” died at the age 77 from pancreatic...

Send flowers to the Janovsky family.