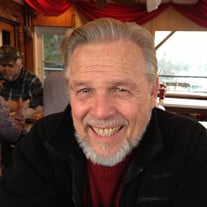 Ian Dale Burman was born in Lake Nebagamon, WI on May 13, 1933, son of Ian Aden and Angeline Adella Kellogg Burman. He moved to San Diego, CA with his mother when he was young. Dale enjoyed his time in San Diego and had many adventures there while growing up. At age 17, he desired to broaden his horizons by dropping out of high school and joining the Army National Guard. He spent most of his time in service stationed in the San Francisco area. Upon discharge, he returned to San Diego and started work as a ditch digger with San Diego Power and Gas. After a brief stint, Dale decided this type of work wasn’t for him and he passed his high school equivalency test. Around this time, he also discovered Christian Science which became a guiding force and passion for him the rest of his life. Following his loves for Christian Science and education, he went on to earn his Bachelor’s degree from Principia College, his Master’s degree from UCLA and his PhD from the University of Illinois, all in Political Science. While completing his education, he returned to Principia, where he became a teacher and author and met his first wife Katie. Dale left Principia after a few years and moved to Marblehead, MA where he worked for the Christian Science Monitor. In MA, he discovered sailing, which became another passion he would carry through the rest of his life. After 7 years of marriage, he and Katie divorced and he returned to teach at Principia. He then moved to MacMurray College, where he met Sheryl Elaine Savage Sellars, with whom he spent the rest of his life. The two were married on December 13, 1974, in Jacksonville, IL, and Dale very much enjoyed raising Sheryl’s 3 children Su, Rick and Kathy. In 1976 Dale was offered a position on Congressman Paul Findley’s staff in DC. Eager for the opportunity, the family moved to Annapolis, MD. Dale and Sheryl had a son, Ian, in 1977 and Dale became very involved in First Church of Christ, Scientist and furthered his passion for sailing. Dale transferred to the Department of Agriculture from Congressman Findley’s staff, before his love of teaching led him to strike out on a new career, becoming a seminar teacher and an evening administrator at Anne Arundel Community College. The opportunity arose to become the Christian Science Committee on Publication for Maryland and he truly loved this work because it married his passions for the church, writing, education and politics and he held this position for nine years. In Annapolis, he spent a lot of time working to help the organizations he loved. At First Church of Christ, Scientist, in Annapolis, he served as First Reader, Board Member, Usher, and chair of several committees, and helped to move the church to its beautiful new facility on Epping Forest Road. He also spent countless hours in the Christian Science Reading Room and was always thrilled for opportunities to educate those who visited. On the water, he was a member and past Commodore of the Cape St. Claire Yacht Club and a member of the Bayfarers and greatly enjoyed day sailing and cruising the Chesapeake Bay on his Seafarer 29 “Sherian”. He also loved attending sailing competitions with Ian and took up racing himself in the local El Toro fleet on his boat “Ugly Stick”. Upon retirement, he and Sheryl switched over to land cruising and they took their beloved camper “Winnie” just about everywhere in the country you can drive to (including the ‘trip of a lifetime’ driving to Alaska and back in 2010). He especially enjoyed visiting all of his children and grandchildren: Su and her husband Steve Ofe, with their two daughters Erin and Alexis (Lexie) in Alabama; Kathy and her husband John Ouellette and their children Zeke, Madison, Brittany, Alexa, Chloe and Paige in Missouri. He also loved his time in Annapolis with Rick Sellars and with Ian and his wife Leah Burman and their children Trey (Ian Dale Burman III) and Casey. And he treasured any time he could spend in Kenner, LA, with his sister Angel Ives. Dale will be remembered as a caring, loving, intelligent and devoted man. While he is greatly missed, the many people that he has touched and influenced during his amazing journey through life are eternally grateful for their time with him. He will live on with God and with them. In lieu of flowers please make memorial donations to First Church of Christ, Scientist, P.O. Box 1705 Annapolis, MD 21404.

Ian Dale Burman was born in Lake Nebagamon, WI on May 13, 1933, son of Ian Aden and Angeline Adella Kellogg Burman. He moved to San Diego, CA with his mother when he was young. Dale enjoyed his time in San Diego and had many adventures there... View Obituary & Service Information

The family of Ian Dale Burman created this Life Tributes page to make it easy to share your memories.