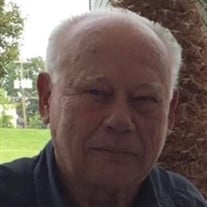 Herbert Fritz Sprunk, 82, passed away peacefully on January 28, 2021 at Future Care of Chesapeake, Arnold, Maryland of natural causes and after numerous years with battling heart disease, diabetes, and end stage renal failure. Given the COVID-19 Virus Restrictions, a private family visit/service was held on Wednesday, January 27, 2021 via Zoom at Future Care of Chesapeake and presided by a dear family friend Rev. Charles Russell of Mt. Pleasant Baptist Church in Washington D.C. Herbert was born on January 30, 1938 in what was then known as East Prussia, Germany to Anna Amalie Pensky Sprunk and Herrmann August Sprunk. He was the seventh of nine children who all grew up in Germany during World War II. It was a difficult time for the family who had to flee East Prussia and build a new life in Harsefeld, Germany. Herbert could always accomplish anything he set his mind to and as such, he and his siblings helped his parents build the new family home from the remnants of buildings destroyed from the war. Herbert attended a trade school in baking as a young man, and in 1956, and at the age of 18, Herbert decided to join his brother Gerhard Sprunk, who had already migrated to the US, landing in Detroit, MI a few years earlier. Not knowing more than a few words of English, Herbert was introduced and embraced by a small community of other German immigrants, socialized with new friends, and continued his trade skill as a baker. It was in Detroit, Michigan that Herbert was introduced to Christl Maria Brueger and she became his wife on April 4, 1959. Herbert utilized his skills as a baker to secure employment in Detroit, MI. However, it was not too long after that he learned a new trade as modelmaker supporting the automotive industry and building car part models out of wood. This skill led him to employment with General Motors (GM), which allowed him to advance his skills in wood and clay modelling, and eventually becoming the Supervisor of the team. Herbert’s hobbies and enjoyments included spending time with all of his children and grandchildren, camping, boating, fishing, golfing, and gardening. Herbert retired from GM in 2000 when he and his wife had a home built in Savannah Lakes Village, South Carolina. They enjoyed many years in their new location establishing new friendships and continuing with the hobbies he so enjoyed. Herbert and Christl were active members of the Lutheran Church by the Lake. In 2018, Herbert and Christl came to visit his son, Erwin and family and decided not to return to South Carolina as their health was declining. Herbert continued to spend several wonderful years living in Maryland enjoying his favorite hobbies of building anything he could think of with his hands and working in the yard. Herbert is survived by his wife of 61 years, Christl Maria Sprunk, his brother Gerhard Sprunk from Michigan, his sisters, Gerda Bosteadt and Karin Mueller (both in Germany), four children, Erwin Otto Sprunk (Joanne), Helga Johanna Crandall (Ted), Norbert Sprunk (Caren), Doris Shaw (Richard), 9 grandchildren, 5 step grandchildren, 3 great grandchildren and 8 step great grandchildren. Herbert will be taken to South Carolina where his ashes will be returned to this earth as per his wishes. In lieu of flowers, donations may be made to the Kidney Foundation (https://www.kidney.org), Heart Foundation (https://www.heart.org) or Diabetes Foundation (https://www.diabetes.org) Condolences can be sent to 3509 Deer Pass Lane, Gambrills, Maryland 21054.

The family of Herbert Fritz Sprunk created this Life Tributes page to make it easy to share your memories.

Send flowers to the Sprunk family.