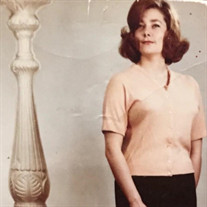 Helga Sigrid (Wagner) Singletary, 82, passed away in Crofton, Maryland on October 7, 2021 after a courageous battle with cancer. Helga, the daughter of the late Phillip Wagner and Erika (Kysilka) Wagner, was born in Hamburg, Germany on November 12, 1938. After being displaced during WWII, her family eventually settled in Frankfurt, Germany, where she graduated from the Ludwig Richter Schule. After graduation, she worked in jewelry sales at the Post Exchange in Frankfurt, where she met her husband Joe Singletary, a U.S. Airman. Helga married Joe on December 19, 1967 in Frankfurt, a few months after the Supreme Court struck down anti-miscegenation laws in the United States. As a military dependent, Helga lived with her family for six years in California and North Dakota before returning to Germany. She worked as an Army civilian at the Rhine Ordnance Barracks and Army Depot in Kaiserslautern before retiring in 2014. Helga had an observant eye and loved laughing and making others laugh. Her favorite way to show affection was to offer food to those she loved. Her compassion for people and animals was always evident to friends and strangers alike. The cats, dogs, and birds she owned throughout her life were thoroughly spoiled. Her many passions included listening to music, dancing, traveling to the Mediterranean, and watching soccer and American football. Helga was predeceased by her two brothers, Phillip Wagner and Siegfried Wagner. She is survived by her husband Joe Singletary; two children, Jasmine Weadon (Jonathan) and Jean Paul Singletary (Martina); by her brother, Gunther Wagner; and by two grandchildren, nieces, and nephews. Her burial will be held at Frankfurt Main Cemetery on a date to be determined. Arrangements have been entrusted to Michel Funeral Home, Frankfurt, Germany.

Helga Sigrid (Wagner) Singletary, 82, passed away in Crofton, Maryland on October 7, 2021 after a courageous battle with cancer. Helga, the daughter of the late Phillip Wagner and Erika (Kysilka) Wagner, was born in Hamburg, Germany on November... View Obituary & Service Information

The family of Helga Sigrid Singletary created this Life Tributes page to make it easy to share your memories.

Send flowers to the Singletary family.