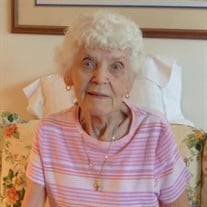 Helen Sandberg Williams, 101, of Davidsonville and Annapolis, MD passed away on March 27, 2022. She was born in Washington DC to Emma and Albert Sandberg and graduated from Northwestern High School. Helen was an 80-year member of the Order of the Eastern Star of the District of Columbia and a lifelong member of the Swedish Lodge in Washington. Helen had one sister (Katherine) and an infant brother (John), both of whom died before her. She was married to Richard Iglehart Williams who preceded her in death. They had three children, Carolyn (deceased), Barbara, and Richard (Cheryl). In addition she and her husband raised their niece, Jean, and nephew, Jim (Barbara). Helen had four grandsons and two great nieces and two great nephews. In addition, she had three great-great nieces and one great-great nephew. She had one great granddaughter. During WWII, Helen worked at Riggs Bank in Washington, assisting in the war coupon rationing department. Towards the end of the war, she married Richard and moved to Davidsonville, where they lived until his death. Helen was a member of All Hallows Parish in Davidsonville, where she served at various times, on the Vestry, Altar Guild, and finance committee. She loved the church and took great interest in the buildings and cemeteries. Helen worked in the Davidsonville Post Office for more than 30 years, first as a clerk, then the mail carrier and finally, as the Post Mistress. Upon retirement from the Post Office, she volunteered for more than ten years in both the Anne Arundel General Hospital and Meals on Wheels. In addition to her loving family and friends, Helen was supported by her devoted caregivers who greatly enhanced her quality of life and enabled her to remain in her home until her passing. Throughout her life Helen enjoyed traveling, gardening, baseball, and family gatherings. A Memorial service will be held on Thursday, June 2, 2022, at 11:00am. The service will be held at All Hallows Chapel in Davidsonville, followed by a reception. Donations in her memory can be made to the All Hallows Parish, Cemetery fund.

Helen Sandberg Williams, 101, of Davidsonville and Annapolis, MD passed away on March 27, 2022. She was born in Washington DC to Emma and Albert Sandberg and graduated from Northwestern High School. Helen was an 80-year member of the Order... View Obituary & Service Information

The family of Helen Sandberg Williams created this Life Tributes page to make it easy to share your memories.

Send flowers to the Williams family.