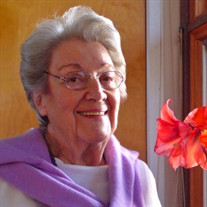 Adelheid (Heidi) Casasco continued her almost 96 year spiritual journey on November 19, 2021. Surrounded by her four children at her Weems Creek, Annapolis home of more than 45 years, Heidi was ready to let go. She was born December 12, 1925 in New York City to Adolph and Fanny Buehler and was raised in Evanston, IL. Heidi's father, Adolph I. Buehler was a Swiss immigrant from a family of watchmakers, opticians and jewelers in Lucerne and Zurich, Switzerland. In 1936 Heidi's father founded A.I. Buehler, Inc., a specialty provider of metallographic sample preparation instrumentation. Heidi's mother, Fanny Eisenhut was born in St.Gallen, Switzerland to a family that had roots in the region for hundreds of years. She like Heidi was an artist and avid gardener. Heidi was a lifelong internationalist traveling the world, speaking Spanish, French, Portuguese, German, and Italian. She was a conservationist, ecologist, UN advocate, and League of Women Voters member throughout her life. She was a graduate of Northwestern University ('47), followed by graduate courses at UCLA, and The Art Institute of Chicago. She was predeceased by her husband Juan and sister Mignon Buehler, and is survived by her children Gini, Victoria, Paul (Jenny), and Remo, eight grandchildren, and four great grandchildren. A celebration of life will take place at a later date. Upon graduating from Northwestern University ( Kappa Kappa Gamma ) with a degree in Political Science (BSc. '47), Heidi traveled to California working in La Jolla and taking graduate courses in Russian language, culture, and history at UCLA, followed by a screen printing and textile design at the The Chicago Art Institute. At a Frank Lloyd Wright lecture, Heidi was introduced by a dear friend to Juan Casasco, a young Italian-Argentine architect, a Fulbright graduate student with Mies van der Rohe at IIT. In September 1950 Heidi and Juan married in Chicago,Il. Their lifelong world travels would soon start with a sea voyage on an ocean liner from New York, to Buenos Aires, Argentina. Soon after their arrival in Buenos Aires, Heidi and Juan designed and built an iconic modern home that physically embraced a sizeable Piñonero evergreen tree that occupied a third of the property. In 1959 the family travelled to Cambridge,MA where Juan would complete a Masters Degree in City and Urban Planning from Harvard University. As part of the Master's program, the family spent several semesters in Omaha, NE, while Juan was a visiting professor at the University of Nebraska. In 1961 Heidi and family returned to Argentina with a new baby in tow, Gini (Virginia) born December 1960, in Boston, MA. In August 1964 the family moved from Buenos Aires, to permanent residence in the United States. Initially in Palo Alto,CA and then in 1966 to the Washington, DC area, Bethesda, with sail boats in Annapolis,MD. Heidi’s love of editing led her to pursue graduate courses in editing at the US Department of Agriculture, a skill that she shared for the next fifty years. In the mid seventies Heidi and family lived in Rio de Janeiro, Brazil while Juan was Regional Director for the U.S. Peace Corps in Brazil. During the family's stay in Rio de Janeiro, Heidi immersed herself in the regions horticulture and contemporary landscape design, spending memorable afternoon's with the renowned Brazilian landscape architect Roberto Burle Marx at his home and atelier. At the completion of the Peace Corps assignment, Juan and Heidi, lifelong sailors, realized a dream of completing a long sailing ocean voyage. In 1974, Juan, Heidi, Gini, Victoria, and Paul departed Rio de Janeiro, Brazil bound for the US Virgin Islands, and eventually Annapolis,MD. For this sailing voyage Heidi and Juan had purchased Cimarron a 43' wooden yawl, beautifully built in Argentina. Arriving in Annapolis,MD on the 4th of July,1975 the first order of business was to build a pier. Heidi and Juan had purchased waterfront property on Weems Creek, Annapolis,MD before departing for the Brazil mission, with the intention of building a house upon their return. Juan and Heidi teamed up again to build their dream home, with a magnificent view of Weems Creek and the Severn River. In the late 70's and 80's Heidi obtained a real estate license and fulfilled a lifelong long passion for landscape design and gardening by curating a structured landscape with sculptural elements in her home's surroundings. In August,1988 while preparing for a sailing vacation in the Adriatic, Juan was diagnosed with cancer and a six plus month window. Before Juan's passing in December,1989 Heidi and Juan travelled to Italy, and to multiple destinations in the U.S. Exploring alternative holistic, organic, and metaphysical paths for nourishment and mental well being Heidi rediscovered her lifelong affinity for spiritual growth. Heidi delighted in attending St. John's College lectures, and was an avid supporter and donor to the College and The Mitchell Gallery. Heidi's love for nature, history, languages, gardening, and world cultures took her on trips to Japan, Thailand, Costa Rica, Switzerland, Alaska, and many more. Her ever inquisitive nature had her always participating in multiple study groups, college courses, yoga, TaiChi, Reiki, Edgar Cayce, Rudolph Steiner, Kathy Odenino, Quaker, and many others. Well into her 90's Heidi continued her college classes, study groups, and water aerobics. A series of strokes in July and August of 2021 affected Heidi's mobility and speech - but not her smile at a voice, or the enjoyment of her very special home and landscape of 45 years. Heidi decided to continue her adventures in another dimension on Friday afternoon, November 19, 2021.

Adelheid (Heidi) Casasco continued her almost 96 year spiritual journey on November 19, 2021. Surrounded by her four children at her Weems Creek, Annapolis home of more than 45 years, Heidi was ready to let go. She was born December 12, 1925... View Obituary & Service Information

The family of Heidi (Adelheid) E. Casasco created this Life Tributes page to make it easy to share your memories.

Send flowers to the Casasco family.