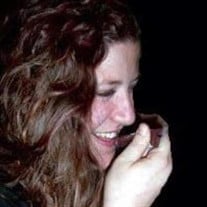 Heather Bostian, age 42, passed away on October 6, 2020 in her home in Annapolis, MD. She was born on October 31, 1977 to Richard and Carol (Hooper) McKelvie of Annapolis. She graduated from Annapolis High School in 1995, and attended AACC with a 4.0 GPA. Heather married David Bostian in 1995. They were to celebrate their 25th anniversary in December. Heather and Dave had two children: Casey in 1996 and Kaelan in 2001. Heather was a career photographer who worked for 15 years at a photography studio. She was active in the band, yearbook, art scene, and played ice hockey during high school. She loved music (especially the Grateful Dead), knitting, scrapbooking, and reading. Despite being chronically ill with Cyclic Vomiting Syndrome (CVS) and seizures, she spent her free time moderating on Reddit and talking to friends on Facebook. Heather loved animals and was never without a dog. Heather leaves behind: her grieving husband Dave Bostian; children, Casey and Kaeli Bostian; mother, Carol Hooper McKelvie; older brothers, Shawn McKelvie (Patti); and Scott McKelvie (Kate), older sister, Sue Lionetti (Eddie); an uncle, Dr Stephen Hooper (Gail); her best friend Anne Mortensen (Matt), and numerous nieces, nephews, and cousins. Predeceasing Heather were her dad, Richard Thomas McKelvie; both sets of grandparents, Zenus & Madeline Hooper and Thomas & Jean McKelvie; an aunt, Linda Cooper; and an uncle, Bill McKelvie. Also surviving Heather are her bereaved dogs: Ceci, Rebel, and Luke. A Celebration of Life will be held for Heather in late spring 2021 (post Covid). Details to follow. In lieu of flowers, a donation may be made to the Cyclic Vomiting Syndrome Association by calling (414) 342-7880 or by visiting cvsaonline.org/get-involved/donate-to-cvsa/.

Heather Bostian, age 42, passed away on October 6, 2020 in her home in Annapolis, MD. She was born on October 31, 1977 to Richard and Carol (Hooper) McKelvie of Annapolis. She graduated from Annapolis High School in 1995, and attended AACC with... View Obituary & Service Information

The family of Heather Marie McKelvie Bostian created this Life Tributes page to make it easy to share your memories.

Send flowers to the Bostian family.