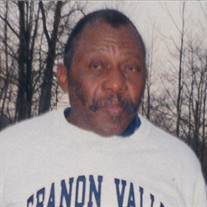 Harvey Dewett Branford, Jr., affectionately known as Junior, answered God’s call and entered into eternal rest on Thursday, October 14, 2021, after a lengthy battle with an illness called Alzheimer’s or Dementia. He was born on October 21, 1942, to the late Harvey and Margaret Branford of Davidsonville, MD. Harvey Jr. received his education in the Anne Arundel County Public School system. He worked over 20 years for the City of Annapolis as a dedicated Sanitation Engineer and retired in later years. On the job, he was fondly referred to as “The Dog Man” or “The Woodsman” because of his love, talented training and raising hunting dogs in which he received the title from. He was a gentle, humble, and generous man that would give you his last, if needed. No matter where he went, he would always run into someone he knew. Harvey Jr., enjoyed dancing, partying, cooking for his co-workers and friends in the community. He wasn’t big on TV, but he loved watching baseball games on the television. Another favorite past time of Harvey Jr.’s was hunting with the dogs he trained, pitching horseshoes and cracking walnuts. He loved and adored his family, especially his sons when they would all get together, Harvey would be in seventh heaven. He was preceded in death by his parents, Harvey Branford Sr., and Margaret Branford; brothers: Ralph, Arthur, and James “William” Branford. He leaves to mourn and cherish his many loving memories, his sons: Harvey D. Branford II, “Pumpkin” Sherman Branford, Gerald J. Branford; Harvey D. Brandord III “Feline”; his daughter, Margaret R. Branford; four sisters: Ethel B. Doris, Lillian F. Walston, Farmestine “Diane” Branford, and Elsie B. Watts- his devoted sister and her special friend, Walter Queen; and a host of grandchildren, great grandchildren, nieces, nephews, cousins, great nieces, great nephews, other relatives and many caring friends.

Harvey Dewett Branford, Jr., affectionately known as Junior, answered God&#8217;s call and entered into eternal rest on Thursday, October 14, 2021, after a lengthy battle with an illness called Alzheimer&#8217;s or Dementia. He was born on October... View Obituary & Service Information

The family of Harvey Dewett Branford Jr. created this Life Tributes page to make it easy to share your memories.

Send flowers to the Branford family.