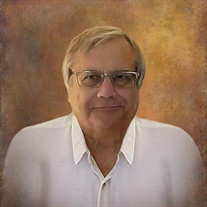 Dr. Harry Louis Salvo Jr. passed away on Sunday, February 7th,2021 at the age of 73. Harry was born on March 26, 1947 in Racine, Wisconsin. Harry (Dad or Grandpa, as he was affectionately known) is survived by his wife of 53 years, Elizabeth... View Obituary & Service Information

The family of Dr. Harry Louis Salvo Jr. created this Life Tributes page to make it easy to share your memories.

Send flowers to the Salvo family.