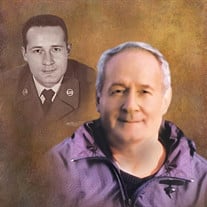 Gerald Joseph Tache’, long time resident of Annapolis, MD, passed away on September 23, 2019 in Columbia, MD. Born in Waterbury, Connecticut on January 16, 1934 to Joseph Albert Tache’ and Lucienne Mary Tache’, he spent the majority of his youth living in Salem, MA, earning a diploma from St. John’s Prep in Danvers, MA and attending Boston University before entering the military, which subsequently led him to Georgia, where he met his eventual bride, Janis Hardage Tache’, and earned a bachelor’s from the University of Georgia in Athens and a master’s from Georgia State University in Atlanta. He was a great son, husband, father, grandfather, brother, uncle, cousin, friend and co-worker who helped a lot of people along the way. He served in the US Air Force in Asia during the Korean War and as a civilian in Asia with US Army Intelligence, based for two years in Japan with his wife. His career with the federal government eventually led him to settle down in Annapolis in 1969 where he became active in the local community. He worked for multiple government agencies in the District of Columbia, spending the most time with and retiring from the Department of Commerce. He was instrumental in starting and cultivating the Benfield ice hockey program (Severna Park, MD) in the 1970s and early 80s, coaching for many years in that sport as well as others. He is survived by his son and daughter-in-law Garett and Dawn Tache’ and beloved granddaughter Anna Tache’ (Columbia, MD); sister-in-law Julie Tache’ (Salem, MA), sister and brother-in-law Kathy and BJ Hatcher, sister-in-law Rosemary Hardage (all of Smyrna, GA), and multiple nieces and nephews in Massachusetts, Georgia, California and Colorado. He was preceded in death by his wife Janis and brother Joseph Tache’ (Salem, MA). Visitation will be held at Lasting Tributes funeral home in Annapolis (814 Bestgate Rd) this Thursday from 5 to 6:30, followed by a service. Burial will be at the Maryland Veteran’s Cemetery (1122 Sunrise Beach Rd, Crownsville) on Friday at 1pm.

The family of Gerald Joseph Tache created this Life Tributes page to make it easy to share your memories.

Send flowers to the Tache family.