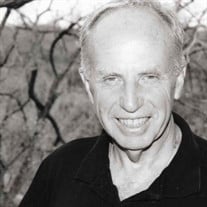 George A. McFarland, Jr., retired US diplomat, Air Force pilot, sculptor, adventurer and free-thinker, and beloved husband, father, and grandfather, died on June 1, 2019. He was just shy of his 89th birthday and had spent the day joyfully celebrating... View Obituary & Service Information

The family of George Albert McFarland, Jr. created this Life Tributes page to make it easy to share your memories.

Send flowers to the McFarland, family.