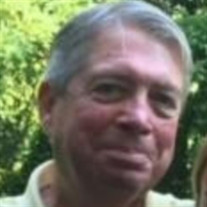 Jake Lerian, 68, passed away peacefully at home on Memorial Day after a 4 year battle with cancer. Jake grew up in Round Bay on the Severn with his parents Moe and Betty Lerian and brother Dan and sister Liz. He graduated from Severna Park High School in 1971. Jake earned his Bachelor’s in Science from Towson State University in 1976. He had a lifelong career as an insurance broker specializing in commercial insurance. He started his career and Ebersberger and Associates and was still employed at Moscker Insurance now called Assured Partners. Jake married the love of his life Carol Gould Lerian on October 6, 1979. Jake and Carol raised three children Ann, Alice and Jake in Whitehall Beach. Jake was an avid golfer and member of the Naval Academy Golf Course. He was the founding “Commissioner” of the “Real Men’s Group” at Navy. Living near the water most of his life, Jake enjoyed boating, crabbing, fishing and racing. Jake was an angler and enjoyed hunting waterfowl and was a former member of Ducks Unlimited and Bass Masters. He was a member and former treasurer of the Annapolitan Club. Jake was an old movie and television buff and enjoyed watching television with his dog George “Juny” by his side. He also enjoyed working in his vegetable garden, working out at Big Vanilla and happy hour with friends at Cantler’s Riverside Inn. Jake was known for his charismatic personality, sense of humor and big heart. He loved his family more than anything and he loved his close friends like family. Jake was one of a kind and will be missed by everyone who’s life he touched. He is preceded in death by his father George Jacob Lerian III “Moe” and mother Elizabeth Peach Lerian “Betty.” Jake (“Dad”, “Pop”) is survived by his loving wife of 41 years, Carol Gould Lerian, his beloved children and grandchildren: Ann Boyd Lerian & husband Mark Uanis and their daughter Julia; Alice Lerian Palmer & husband Max and their 3 children Nora, Eva and Max; George Jacob Lerian IV “Jake” & wife Virginia and their daughter Taylor. There will be a celebration of Jake’s life at a later date. In lieu of flowers please make donations to the SPCA of Anne Arundel County.

Jake Lerian, 68, passed away peacefully at home on Memorial Day after a 4 year battle with cancer. Jake grew up in Round Bay on the Severn with his parents Moe and Betty Lerian and brother Dan and sister Liz. He graduated from Severna Park High... View Obituary & Service Information

The family of George Jacob "Jake" Lerian III created this Life Tributes page to make it easy to share your memories.

Jake Lerian, 68, passed away peacefully at home on Memorial Day...