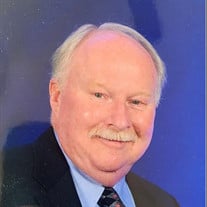 It is with great sadness that the family of Gary Runkle announce his passing on Sunday, February 7, 2021. Gary Lee Runkle (75) of Glen Burnie, Md., formerly of Annapolis, Md. and Steelton, Pa., was born Valentine’s Day-February 14, 1945. Gary was a 1963 graduate of Steelton-Highspire High School. A job opportunity with the Miller & Long Concrete Company took him to Annapolis, Md. He spent 27 years with them, starting as a hard-core iron worker before aspiring to the position of Rod Foreman. Gary was the devoted husband of Catherine (Hartman) Runkle, having been married since September 27, 1963 - 57 wonderful years. His greatest love and joy in life was his family. Gary was proceeded in death by his parents, Gerald Runkle and Katherine (Sellers) Runkle Rhodes; his stepfather, Arthur Lynn Rhodes, and his brother, Arthur L. Rhodes, Jr. “Butch”. In addition to his beloved wife, Catherine, Gary leaves behind his daughter, Susan Blades (who held the key to his heart) and her husband, Lenny; grandsons, Seferino Martinez (and wife, Kara) and Nicholas Martinez (who were his pride and joy); his brother William Rhodes, and brother Greg Runkle (and partner Jeff); Beloved cousins, Margaret Blanch and Kathryn Jones; as well as many cousins, nieces, nephews and friends. Gary was known as an easy-going, generous, eternally optimistic, kind-hearted man who lived by the Golden Rule. He had a unique, unforgettable laugh and a lifelong love affair with apples. Gary was actively involved as a coach with Annapolis Youth Football for many years. He was not just an avid Notre Dame football fan, but also a season ticket holder at Navy-Marine Corps Memorial Stadium where he loved cheering on the Midshipmen. Gary enjoyed, all sports, camping in his younger years, playing cards, annual beach trips with his extended family and traveling. Among his favorite trips were those to Hawaii to see the Pearl Harbor Memorial, St. John, USVI, San Francisco & Canada with his favorite cousins. He was happiest when vacationing or spending time with his family. Gary will be missed but never forgotten by his loving family and friends. Visitation will be held from 2-4pm on Saturday, February 20, 2021 at Lasting Tributes, 814 Bestgate Road, Annapolis, MD 21401. In lieu of flowers, memorial donations may be made to Alzheimer’s Association: 225 N. Michigan Ave., Fl. 17, Chicago, IL 60601 or via their website Alzheimer’s Association. Hopefully, someday soon this horrible disease, often called the “thief of hearts, souls and memories”, will be eradicated (OR CONQUERED).

It is with great sadness that the family of Gary Runkle announce his passing on Sunday, February 7, 2021. Gary Lee Runkle (75) of Glen Burnie, Md., formerly of Annapolis, Md. and Steelton, Pa., was born Valentine&#8217;s Day-February 14, 1945.... View Obituary & Service Information

The family of Gary Lee Runkle created this Life Tributes page to make it easy to share your memories.

It is with great sadness that the family of Gary Runkle announce...

Send flowers to the Runkle family.