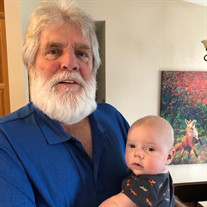 Frederick (Freddy) J. Rupp a resident of Arnold, Maryland passed away May 17, 2020 at age 73 after a seven month battle with cancer. Freddy will be remembered for his smile, big laugh, funny jokes, his big heart and bear hugs. Freddy was born in Lancaster, Pennsylvania to the late Sarah and Edward H. Rupp. His Dad was in the Air Force so the family moved around the world to various bases. They settled in College Park, Maryland. Freddy attended High Point High School. He enlisted in the Army and served with the 68th Armour Division and was as he said “ your friendly tank commander”. Following his service to his country, he worked as a letter carrier for the post office and later did landscaping. Freddy was a long time member of Asbury United Methodist Church in Arnold, Maryland. He served on the Trustees committee and helped in any way he was asked . He especially loved working with elderly church members that needed chores done. For many years he volunteered for Meals On Wheels which bought him much joy. He was a faithful servant of God and helped everyone he could. He enjoyed all kinds of sports. Freddy will always be a baseball player at heart. He played many years in various leagues in College Park and Annapolis. He was a Nats and Orioles fan. He helped coach his daughter’s soccer team and was an avid fan for all the teams she played on and again made lasting friendships through sports. Freddy was a loving and caring: husband, brother, dad , grandfather and uncle. He was preceded in death by his Mom and Dad and older brother, Ted Rupp. He is survived by his wife and best friend, Jan Rupp of Arnold; two brothers: Ed Rupp of Ocala, Florida and Walter Rupp and his wife Anita of Crofton, MD. His two daughters, Tracy Rupp of Charlotte, NC and Kim Rupp Wynn and her husband JD of Riva, MD. He has two grandsons : Joseph of Charlotte , NC and lil Freddy of Riva, MD. In addition, his cousins in Lancaster, PA and many nieces, nephews, grand nieces and grand nephews. In lieu of flowers , memorial contributions may be made to: Meals On Wheels, Attn: Development Dept, 515 South Haven Street, Baltimore, MD. 21224 or Asbury United Methodist Church, 78 Church Rd., Arnold, MD 21012. Due to Covid, a military service and church memorial service will be held when social gatherings are once again safe and permitted.

Frederick (Freddy) J. Rupp a resident of Arnold, Maryland passed away May 17, 2020 at age 73 after a seven month battle with cancer. Freddy will be remembered for his smile, big laugh, funny jokes, his big heart and bear hugs. Freddy was born... View Obituary & Service Information

The family of Frederick J. Rupp created this Life Tributes page to make it easy to share your memories.