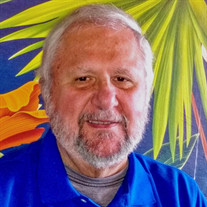 Frank Anthony Capuzzi, 76, of Severna Park and Annapolis, Maryland, died peacefully on February 7, 2022, surrounded by his family and many friends, who will always remember him for his good humour, intellectual curiosity, and love of conversation. Frank was the beloved husband of Patricia Carey Capuzzi, his wife for more than 52 years, and was a devoted father to his children Claire Vail (Jeff) of Boston, Massachusetts, and Daniel Capuzzi (Denise) of Los Angeles, California. Frank delighted in spending as much time as possible with his only grandchild, Olivia Morgan Vail. Frank was born on July 11, 1945 in Pittsburgh, Pennsylvania to Francesco and Louise Capuzzi. The fourth of five children, he is survived by his siblings Ethel Daher (Chicago), Sandra Robbins (Columbus, Ohio), and Michael Capuzzi (Greensburg, Pennsylvania), and by 27 nieces and nephews. At 14, Frank entered the minor seminary Charlestown in Baltimore, Maryland. While he excelled at the classical curriculum, he later left to earn an MA and Ph.D in philosophy at Duquesne University in Pittsburgh. He also pursued an MFA in film and television at Carnegie-Mellon University, completing both degrees in 1968. He met Patricia at a graduate lecture, and they married in December of 1969. Frank's professional career began at The College of New Jersey in Trenton, where he taught education and film and television. He later worked at New Jersey Public Television developing courses and documentaries. In 1989, he was awarded an Emmy for his work on a documentary on teenage runaways. In the mid-1980s he accepted a position as a corporate educator with Ford Aerospace in Maryland, which led to executive roles with Loral Corporation, CACI, and Louden Associates. When he retired at 59, Frank combined consulting work with a return to his first love – teaching. He was thrilled to share his lifelong passion for philosophy and ethics with students of all ages at Anne Arundel Community College. On turning 65, Frank joined the Peer Learning Partnership (PLP), a senior learning community at AACC, where he joyfully devoted his last years to teaching classes that drew on his knowledge of ethics, literature, history, philosophy, film, and theater. Frank made deep and lasting friends throughout his entire career, but his PLP classes, which gave free range to his imagination and creativity, brought many new, vibrant personalities into his life. His passion for learning and love of people remained strong to the very end, despite his illness. Nurses and attendants adored the man who instantly learned their names, and who’d rather talk about Dante than dialysis. Frank touched many minds and even more hearts, and will be greatly missed by everyone who knew him. A memorial service for family and friends is being planned for the spring.

Frank Anthony Capuzzi, 76, of Severna Park and Annapolis, Maryland, died peacefully on February 7, 2022, surrounded by his family and many friends, who will always remember him for his good humour, intellectual curiosity, and love of conversation. Frank... View Obituary & Service Information

The family of Frank A. Capuzzi created this Life Tributes page to make it easy to share your memories.

Send flowers to the Capuzzi family.