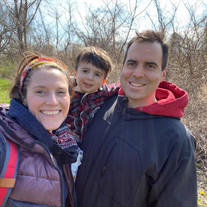 Federico Garduño, father, husband, and a best friend to me and to pretty much everyone who met him, died last week in a tragic accident. He was visiting his family in his hometown of Annapolis. My name is Dan, and I met Fed twenty years ago, in the spring of 2002 as part of a sketch writing group. His head was half-shaved in some sort of avant-garde attempt at a mohawk. He was wearing unsettlingly small sweatpants and a patterned sweater that looked to be from 1988. Also, way too small. He seemed to me like he might be a poorly thought-out villain in Teenage Mutant Ninja Turtles comic. I was kind of afraid of him. And then we all read the sketch he brought to that first meeting, and I was instantly taken over. I knew then that Fed was the funniest person I had ever met and would probably ever know. That still holds true. Fed was funniest and smartest person in any room he was in. He had an astonishing ability to come up with just the smartest, goofiest jokes on a dime and deliver them like they were nothing. Jokes that would make you laugh and leave you shaking your stupid head because, how did he do it? Again and again and again. I still remember a time when we were walking on 33rd Street and I had to stop because he’d just said something so absolutely, otherworldly funny. I actually asked him how he does it. And he replied with a “what are you talking about?” Because for him the joke was already gone into the ether and it was time to move onto the next. He had performed stand up for years, and wrote here and there for some online publications, but he really shined as an improviser. He performed all over the city, with his longest tenure at The Magnet Theater. He truly loved all of his fellow performers. They meant the world to him. Fed was a teacher. He would hate to be defined and remembered for what he held down as a job. But he found his home off the stage at MS447 in Brooklyn. His interactions with the students brought him real happiness. We all have those special teachers that we remember into adulthood. Fed was one of those. Above everything else, Fed loved his family so so much. He loved and admired his parents and his sisters. It was clear he came from an incredibly loving family (that was doused with a heavy dose of acerbic wit). As for his wife Mindy, he had never fallen in love with someone until he met her. This is something he told me again and again. He was in a dark place when they met, and she turned everything around for him. He would call me just to tell me how happy he was with her in his life. And then he would ask me if that was normal, just to make sure he wasn’t losing his mind. He knew how absolutely lucky he was to have Mindy as a wife and partner in life. And then came his son Iggy. Before Iggy was born, Fed confided to me that he was scared. He couldn’t see himself as being able to do the things a good dad does, that he couldn’t see himself caring about toddler stuff and having to hang out with other parents at a playground. It’s a pretty typical feeling. For once, Fed was completely wrong. He loved being a dad more than anything in the world and he was such an exceptional one. It’s impossible to overstate how loving and caring and fun he was with his son. Obviously, there was so much more to Fed than can be said here, he was such a good man. But I would like to mention a couple more things. First his love of all animals and nature. Included in this were his beloved dog Nacho, his less beloved, but still very loved Noelle, BunBun, David Bowie, newcomer Buttercup. He even loved the demon spawned Mike. Second: Fed lived in the moment—sometimes to the utter consternation of those around him. He would absolutely hate how we are dwelling on him and how earnest all this is. I can hear him saying, “Yeah, this is good, but maybe consider cutting… all of it?” Fed would tell me he didn’t see himself as someone who desperately needed to make a room full of people laugh. He much more enjoyed huddling up with one person to tell them jokes. In a bar. At a party. Watching TV. And, yes, hanging out at a playground. I was so blessed and lucky to be one of those people for 20 years. And I know that everyone else who got to be that person at some point feels the same. Oh, and there was a reason for that get-up and insane hairstyle he was wearing when we first met. Please ask me about it sometime and we can share our memories of Fed and have a laugh. -Dan Milledge

Federico Garduño, father, husband, and a best friend to me and to pretty much everyone who met him, died last week in a tragic accident. He was visiting his family in his hometown of Annapolis. My name is Dan, and I met Fed twenty years ago,... View Obituary & Service Information

The family of Federico Garduño created this Life Tributes page to make it easy to share your memories.

Send flowers to the Garduño family.