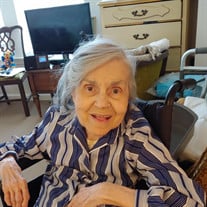 Evelyn Lentz Hoffman, born on November 28, 1924 in Baltimore, MD, passed away in Annapolis on January 10, 2021. She was the daughter of the late William H. Lentz, Jr., and Karolina Krautsak, with both her parent’s families being recent immigrants from Germany and Austria. Evelyn attended public schools in Baltimore and graduated with honors from Forest Park High School in 1942. Despite her scholarly achievements, higher education opportunities for woman were then limited and her family could not afford sending her to college. She started working as a stenographer. Soon thereafter, at a church social for World War II serviceman, she met her future husband, George Lee Hoffman. George was a member of the US Navy, serving in the engine room of a destroyer escorting merchant ships across the battle-strewn Atlantic. From the fleet, he gained entrance into the US Naval Academy, and graduated in 1948. George and Evelyn were married shortly thereafter. Being a military family, they moved frequently, with their first duty station in Troy, New York, where George completed a degree in engineering and joined the Civil Engineer Corps. Evelyn continued her education at Russell Sage College in Troy. Other ports of call were in Maryland, Virginia, Rhode Island and Puerto Rico. Two children were born of their marriage, the first Kathleen Evelyn, now deceased, in 1953, and Evelyn’s surviving son, Mark Lee, in 1958. Evelyn had to care for the children alone for several extended time periods, when George was assigned duty stations in Africa and the Antarctic. In the late-1960s, the family settled in Severna Park, Maryland, where Evelyn continued to live for most of her remaining life. Her focus was the rearing of her two beloved children and maintaining the household. Her husband’s untimely death in 1983 created huge challenges for Evelyn, but she persevered, and returned to college to seek the bachelor’s degree she had long desired. Attending a special program at Goucher College for older women, after many years she received a BA with a major in English, one of her proudest accomplishments. She continued to take many classes at Anne Arundel Community College’s Peer Learning Partnership program in her later years. Evelyn is survived by her son Mark, his wife, Kathleen Fleming and a grandson, Matthew Lee, from Mark’s first marriage. Services will be held at Arlington National Cemetery, at a future date, where she will once again be with her loving husband.

Evelyn Lentz Hoffman, born on November 28, 1924 in Baltimore, MD, passed away in Annapolis on January 10, 2021. She was the daughter of the late William H. Lentz, Jr., and Karolina Krautsak, with both her parent&#8217;s families being recent... View Obituary & Service Information

The family of Evelyn Hoffman created this Life Tributes page to make it easy to share your memories.

Send flowers to the Hoffman family.