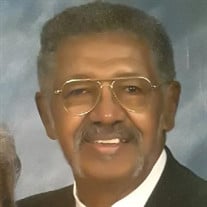 Ernest Nathaniel Edwards, better known as “Ding,” 89, transitioned from Earth to Glory on Sunday, March 22, 2020 at the VA Medical Center in Washington, DC after a lengthy battle with dementia. Ernest was born on February 4, 1931 to Gladys and Alfred Edwards of Waterbury, Maryland. He was the second of seven siblings. Residing in Annapolis, Maryland until relocating to Bowie, Maryland until his demise. In Ernest early years, he joined the U.S. Army. He later met his wife Edna C. Colbert and they united in marriage on January 28, 1953. Showing a vast interest in tractor trailer driving he went on to obtained a commercial driver’s license. Upon his early years he was gainfully employed with Highway Supply shortly thereafter he was employed with Jack Gray Transport until his retirement. Once he received Christ, Ernest joined Fowler United Methodist Church where he was a dedicated and faithful member being chosen to serve as a Lay Speaker in addition to serving on various ministerial committees until the onset of his illness. In this spare time, “Ding” enjoyed spending time with family, traveling, watching baseball, and listening to good gospel music. Ernest leaves to mourn his wife, Edna C Edwards of 67 years; his daughter, Veronica L. Edwards; his granddaughter, Jessica O. Anderson; his grandson, Rashaad A. Welcome Sr.; great-grandson, Rashaad A. Welcome Jr.; his sister Audrey Better; his brothers Gordon and Alphonse Edwards. He is preceded in death by his parents, Gladys and Alfred Edwards Sr.; two brothers, Alfred Edwards Jr and Stanley (Sonny) Edwards; a sister, Elsie Shorter; a daughter, Brenda J. Oredein. He will be greatly missed by many nieces and nephews, cousins’ family and friends. Ernest will be laid to rest at the VA Cemetery in Crownsville, MD at a later date.

Ernest Nathaniel Edwards, better known as &#8220;Ding,&#8221; 89, transitioned from Earth to Glory on Sunday, March 22, 2020 at the VA Medical Center in Washington, DC after a lengthy battle with dementia. Ernest was born on February 4, 1931... View Obituary & Service Information

The family of Ernest Nathaniel Edwards created this Life Tributes page to make it easy to share your memories.

Send flowers to the Edwards family.