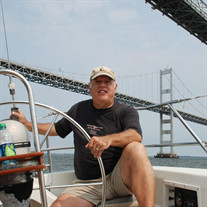 ERIC FITZHUGH STOER, 74, of Annapolis, MD, passed away on March 14, 2019 after a long battle with cancer surrounded by his family. Beloved husband of Judy (Brown) Stoer, loving father of John Stoer, Kate Ben-David (Isaac), Philip Stoer, Henry Stoer and Pops of Ellie Ben-David. Born August 6, 1944 in Philadelphia to Philip Riera Stoer and Marion West. Eric grew up in Middle River, Maryland along with his older brother, Nicholas Stoer, who passed away just this past October at the age of 76. Eric attended Friends School in Baltimore, then moved on to the University of Maryland where he played lacrosse and received a BA in 1966. He furthered his education at the University of Maryland School of Law where he received a JD in 1969. His deep love of politics led him to serve as an Advance Man for the 1972 Nixon re-election campaign and to also work on the 1976 Ford presidential campaign and the 1988 Bush presidential campaign. From there he went on to practice law for over 50 years in Washington, DC. Eric started his law career as a Trial Attorney at the Federal Trade Commission. He moved to private practice specializing in the areas of corporate and business law with an international focus. Eric was a partner at Reed, Smith, Baker & Hostetler and at Bryan Cave LLP. Eric had vast university technology transfer experience. He represented various universities in their out-licensing programs as well as representing companies securing licenses from universities. Starting in the early 1980’s his prime focus moved toward the biotechnology and pharmaceutical industries negotiating more than 100 licensing, partnership, joint ventures, mergers and acquisitions and strategic alliance transactions throughout the world. Eric served as Chairman and Chief Executive Officer at FASgen, Inc., Chairman of St. Renatus, LLC and the Diabetic Foot Centers of America, Inc. He was a member of the Boards of Munich Biotech AG, and Boehringer Mannheim Pharmaceuticals. Eric also served for 10 years on the Board of the Enterprise Investment Fund, the State of Maryland’s early stage venture fund. Eric was one of the founders of the National Bank of Northern Virginia. Law, business, and politics were not his only passions. Eric started sailing at an early age with his family out of Middle River and his love of the Chesapeake Bay grew from there. He became an avid sailor. A long serving member of the Annapolis Yacht Club, he successfully raced his boat P.O.S.H. on the Bay for years, while also competing in long distance ocean races such as The Newport-Bermuda race, multiple Annapolis-Bermuda races and multiple Annapolis-Newport races, where he won his class in 1991. Eric also continued his passion for lacrosse after college. He played and coached for the Georgetown Club team for a year before becoming a referee for years in the DC/Northern Virginia Referee Association. When he moved to Annapolis, he was an assistant coach for his son Henry’s team. Eric also loved to play golf and taught all of his children how to play the game. His two youngest, Phil and Henry, are continuing with their father’s passion for the sport. Eric enjoyed watching most sports. He introduced his oldest son John to European soccer at an early age. They continued to this day to watch matches regularly, although not always rooting for the same teams. Even with Eric’s vast array of experiences in his professional world, his greatest accomplishment was his family. The latest addition of his granddaughter Ellie made him smile the most and he was so proud of his daughter Kate and the mother she became. A celebration of Eric’s life will be held at Lasting Tributes Cremation and Funeral Care, 814 Bestgate Road, Annapolis, Maryland on Saturday, April 6th. Memorial gathering to begin at 11am with service to follow at 12pm. In lieu of flowers, donations may be made to The Chesapeake Bay Foundation or The American Cancer Society.

The family of Eric Fitzhugh Stoer created this Life Tributes page to make it easy to share your memories.

ERIC FITZHUGH STOER, 74, of Annapolis, MD, passed away on March...