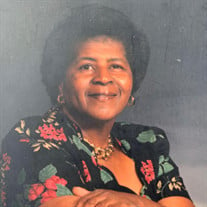 Eleanora Portia Chambers, beloved daughter of the late James and Bernice Chambers, was born on August 19, 1945, in Annapolis Md. She was the second of 10 siblings. On Tuesday January 25, 2022, Pat peacefully entered eternal rest at Anne Arundel General Hospital of Annapolis. Eleanor, affectionately known by all as “Pat,” was raised in the Parole Community of Annapolis, and later moved to Severna Park, Md. Pat received her formal education in the Anne Arundel County Public School System. She was a proud graduate of Wiley H. Bates High School, Class of 1963. Pat began her employment at Fred’s Restaurant in Annapolis. After a year, she searched for her professional desire. Pat’s passion for caring for others led her to a career in nursing at North Arundel Hospital (Baltimore-Washington Medical Center). For 43 faithful years, Pat worked in the Cardio and Intensive Care units caring for patients as though they were her own faithfully. Numerous awards and citations were given to her for her leadership and dedication until her retirement in 2010. Pat was an avid and gifted bowler. She bowled on various leagues five out of seven evenings per week from Odenton, Glen Burnie, Annapolis and Woodlawn. Pas was a true master on the lanes. She was an active member of the 600 and 700 club, WIBC (Women’s International Bowling Congress), and the traveling club for forty years. In 1990, Pat received one of the highest achievements in bowling by being inducted into the Maryland Bowling Hall of Fame. Pat also enjoyed gardening, nature and all sports. She loved to beautify the yard with her colorful flowers. In the back, Pat had the healthiest vegetable garden one would see. She proudly shared her vegetables with her family and friends. Whenever there was any type of sporting event on TV, you would find Pat watching and cheering on her favorite team every quarter and inning. Family quality time was an important part of Pat’s life. She was never to busy for her family. On her off days, Pat would gather her nieces and nephews and to take them crabbing and fishing at Ft. Smallwood State Park, or have them drag her bowling gear to the lanes. Pat was preceded in death by her two brothers, Bruce Chambers and Angelo Chambers and nephew Cyril A. Palmer III (C.P.) Pat leaves to cherish her memories:5 sisters, DeMorris D.C. Palmer; Cecelia A. Chambers, Serene V. Perrin (Albert) and Angela Chambers; 3 brothers, LaGrant Chambers (Betty), Thurston Brooks (Karen) and Grover Chambers (Leslie); sister-in-law Barbara Chambers; a host of nieces, nephews and other relatives. A public viewing will be held on Thursday, February 3, 2022 from 10 am until the beginning of her funeral service at 11 am at Lasting Tributes. Services will be livestreamed on the funeral home website. Burial will follow at Bestgate Memorial Park.

Eleanora Portia Chambers, beloved daughter of the late James and Bernice Chambers, was born on August 19, 1945, in Annapolis Md. She was the second of 10 siblings. On Tuesday January 25, 2022, Pat peacefully entered eternal rest at Anne Arundel... View Obituary & Service Information

The family of Eleanora Portia "Pat" Chambers created this Life Tributes page to make it easy to share your memories.

Send flowers to the Chambers family.