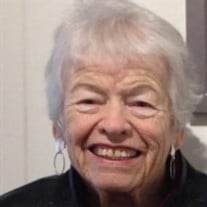 Eleanor Wohlfeld, age 92, of Annapolis, Maryland, passed away on August 29, 2019. Eleanor had a unique and varied life as an artist, antique shop owner, English and Head Start teacher, paralegal, and above all else, loving daughter, wife and mother. Born in New York City in 1927, she enjoyed learning, and enrolled at Hunter College, where she met her future husband, Bill. It was love at first sight, and they were soon married and moved to California a year later. Bill went to the University of Southern California while Eleanor supported them as a secretary and continued to take college classes whenever she could. Approximately 10 years and two children later, they moved to Maryland so Bill could start his federal career. Eleanor completed her dream of a long-awaited college degree and graduated from the University of Maryland with a degree in Early Childhood Education. She became one of the first Head Start teachers. Her husband’s career took the family to Quito, Ecuador, and American Samoa, where Eleanor taught English at the high school and college levels. She enjoyed being involved in the local culture wherever they lived and was active in the arts. She was elected President of the Women’s Cultural Society of American Samoa in 1970-1971. Upon returning to the Washington area, Eleanor and Bill settled in Reston, Virginia for the next 30 years. Eleanor enjoyed going to antique auctions, and after filling up the garage with deals too good to be true, she opened a small antique shop in Leesburg, Virginia called “Eleanor’s Antique Emporium.” Eleanor pursued her artistic interests, taking fiber art classes and joining the Potomac Craftsmen Gallery at the Torpedo Factory, where she exhibited her fiber art work. Continuing her desire to help others, she graduated from the paralegal program at George Washington University and became an advocate for senior citizens in Reston and Herndon. She was elected President of the Advisory Board for the Northwest Center for Community Mental Health from 2000 – 2001 and was recognized for her leadership on behalf of the Fairfax County Women’s Crisis Shelter. Her art interests expanded to printmaking, and Eleanor’s award winning works were displayed at the Greater Reston Arts Center, the Torpedo Factory, Glen Echo, and other galleries. In 2003 Eleanor and Bill moved to Heritage Harbour in Annapolis to be near their daughters. Eleanor continued her art studies at Anne Arundel Community College, and her art was displayed locally at the Maryland Federation of Art Gallery, the Mitchell Gallery at St. John’s College, and at Art Between the Creeks shows. She leaves this life after fulfilling her goals of helping others, educating, and advocating for those in need, and bringing beauty to others through her artwork. Married for 69 years, she was predeceased by her husband Bill in 2017, her parents, Mollie and Alvin Lowy, brother Edwin and sister Alex. She leaves behind two daughters, Andrea (Kurt) and Valerie, step-granddaughter Karina, and numerous nieces and nephews. Interment private. In lieu of flowers, donations may be made to the Maryland Federation of Art https://mdfedart.com/support/. or your favorite charity or art venue. The family wishes to thank all the caring people at Brightview South River, Home Instead, and Hospice of the Chesapeake.

Eleanor Wohlfeld, age 92, of Annapolis, Maryland, passed away on August 29, 2019. Eleanor had a unique and varied life as an artist, antique shop owner, English and Head Start teacher, paralegal, and above all else, loving daughter, wife and... View Obituary & Service Information

The family of Eleanor Wohlfeld created this Life Tributes page to make it easy to share your memories.

Send flowers to the Wohlfeld family.