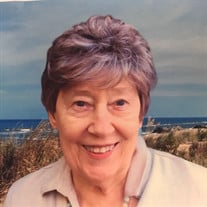 Elaine Ensel (Andrews) Harms died on November 27, 2019 at the Mandrin Chesapeake Hospice House in Annapolis, Maryland. She was born on March 23, 1929 in Fairhaven, Massachusetts, to the late Winnifred M. (Padelford) Andrews Baldwin and Frank P. Andrews, Jr. She was the devoted wife of the late Kenneth G. Harms and the loving mother of Jamie L. Harms (Kari) and Leslie A. Scheuer (Mark). She was also the doting grandmother of Craig S. and Rebecca A. Scheuer. Growing up on the idyllic shores of Buzzards Bay, she never lost her love for the sea. During high school, she attended Swain School of Design night school in New Bedford, Massachusetts. After high school graduation, she moved to Boston where she attended Vesper George School of Art, aspiring to a career in commercial art. After her marriage, she moved to suburbs of Reading, Pennsylvania, where her husband entered the field of powder plastic coating on metals for industry, eventually forming his own company. There, she transitioned into fine art and exhibited locally. A lifelong volunteer, beginning as a teenage plan spotter during World War II, she was active in community and school projects. She was a Brownie and Girl Scout leader and an early fund raiser for Muscular Dystrophy. Elaine accompanied her husband on many fly-in and other fishing vacations in Northern Canada, Alaska and Central America and enjoyed his retirement years on Hutchinson Island, Florida, six months of the years until his death in 2008. They also visited European countries and through the United States during his lifetime. As time went by, she decided to move to Ginger Cove, a lifecare community, in Annapolis, Maryland, to be near one of her daughters. There, she enjoyed the camaraderie from the residents and continued volunteering on the many committees. She was predeceased by her brother, Frank P. Andrews III, and is survived by his daughters and grandchildren. Elaine’s ashes will be strewn over her beloved Buzzards Bay. Memorial contributions in lieu of flowers may be made to Ginger Cove Foundation for the of all who made her last years there so fulfilling.

The family of Elaine Ensel Harms created this Life Tributes page to make it easy to share your memories.

Send flowers to the Harms family.