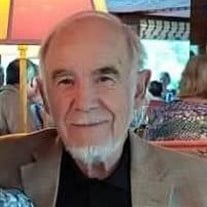 Edwin L. Rogers of Annapolis, Maryland, passed away peacefully at home on Thursday May 2, 2019. He was with his devoted wife of 35 years, Jane S. Rogers and several family members. Ed (or “Buddy” as he was known to his family) was born on July 30, 1934 and spent the majority of his life in the Washington, D.C. area. He attended high school at Montgomery Blair and graduated from the University of Maryland – College Park with a degree in Zoology. Ed and Jane were successful entrepreneurs and owned several family businesses together in Washington, D.C., including a Sir Speedy printing/copying franchise. They retired in 1997 and moved to Pawleys Island, South Carolina where they spent a number of years walking on the beach, making good friends and entertaining family on visits. They moved back to Annapolis in 2015 to be closer to their family. Ed was an avid runner earlier in his adulthood and a vigorous walker later in life, walking as much as 5 miles a day. He also enjoyed singing and had a splendid baritone voice. He volunteered for the local hospital in Pawleys Island helping out in the pharmacy. He also enjoyed playing horseshoes and working in his yard. After retiring, Ed and Jane traveled extensively in the U.S. and elsewhere, driving their RV camper across the country. Finally, Ed was a gentleman in the true sense of the word and a man of faith. Ed is survived by his loving wife, Jane S. Rogers, three daughters – Amy Ward (Brian), Barbara Savaliski (Jerry), and Sarah Torbeck (Steve); one step-daughter, Jennifer Prevo (Pat); and two step-sons Scott Braman (Suzanne) and Darrell Braman (Randi). He has 17 grandchildren and 10 great-grandchildren. Visitation will be held on Tuesday, May 7, 2019 at Lasting Tributes from 6-8 pm. His funeral service will be held on Wednesday, May 8, 2019 at Evangelical Presbyterian Church of Annapolis, 710 Ridgley Ave., Annapolis, MD 21401 at 1:00 pm with burial to follow at the church cemetery. In lieu of flowers, donations may be made in Ed's name to the Alzheimer's Association (www.alz.org/donate).

Edwin L. Rogers of Annapolis, Maryland, passed away peacefully at home on Thursday May 2, 2019. He was with his devoted wife of 35 years, Jane S. Rogers and several family members. Ed (or &#8220;Buddy&#8221; as he was known to his family) was... View Obituary & Service Information

The family of Edwin Lewis Rogers, Jr. created this Life Tributes page to make it easy to share your memories.

Send flowers to the Rogers, family.