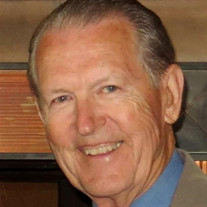 Commander Edwin (Ed) Morton Custer Jr, USCG, Retired age 86, of Annapolis, MD passed away suddenly January 8, 2020 in Incheon, South Korea after celebrating the holidays with family at USAG Camp Humphreys. He leaves his wife, Laura Custer; son from his first marriage Edwin M Custer III, his brother Jonathon Custer and wife Linda of San Diego. He was preceded in death by his brother Calvin Custer. Ed was born on October 24, 1933 in Fall River, MA to Edwin Morton Custer and Edith Rasmussen. Ed’s father was a Navy medic stationed on Guam with his family in 1941. Ed, his mother and brothers evacuated and returned to the US prior to the Japanese invasion, where his father was taken as a POW and held in Japan for the duration of WWII. During this time, Ed lived with family in Fall River and spent many hours with his cousins at his favorite place in the world, simply known by him and his cousins as, “The Island.” After WWII the family reunited and moved to San Diego, CA. Ed was an avid tennis player while attending St Augustine High School in San Diego. Ed proudly served in the U.S. Coast Guard for 30 years and was a graduate of George Washington University. In 1963 he married Marjorie Dickerson after she drove cross country to join him in Portsmouth, VA. While in the Coast Guard, Ed spent time aboard a buoy tender in Adak, AK and the USCGC Aurora as the XO in Puerto Rico. The highlights of his career included his time aboard the USCGC Taney, which was decommissioned in 1986 and is now part of Baltimore's Inner Harbor and cared for by the Baltimore Maritime Museum. At Coast Guard Headquarters in Washington, DC he led a team managing all Coast Guard housing around the world. Years later he would say it was the best job he ever had. Over the years Ed remained an avid volunteer with the Boy Scouts. While stationed in Alaska, he and his wife, Marjorie Dickerson, started Troop 21, the Keet Killer Whales, in Juneau. He fondly recalled the troop’s camping trips, including an overnight on a glacier. After retiring from the Coast Guard, Ed and Marjoire went on to establish a successful career in real estate in the Annapolis area. After 32 years of marriage Marjorie passed away in 1993. Ed then married Edie Drosten. They were married for fifteen years before her passing. He spent time with her four children and their families and was known as “Granddaddy” to her seven grandchildren. Ed and Laura Brandt were married on Aug 4, 2012, the Coast Guard’s birthday. They enjoyed traveling the world together and visited over 50 countries. Germany was Ed’s favorite country and Munich his favorite city. He was fond of the theater and frequented many productions in the Annapolis area, however, London was a particular favorite theater destination of his. He looked forward to monthly meetings with the couples book club. WWII books ranked among his favorites. Ed attended weekly luncheons with “The Lost Patrol,” a group of veterans who enjoy swapping stories. Ed spent many hours working in his yard and landscaping the garden in his tireless effort to outsmart the deer! Ed was a kind and loving man and will be missed by many. Memorial donations may be made to: US Coast Guard Foundation (https://coastguardfoundation.org/) Boy Scouts of America National Capital Region (https://www.ncacbsa.org/)

The family of Edwin Morton Custer Jr. created this Life Tributes page to make it easy to share your memories.

Send flowers to the Custer family.