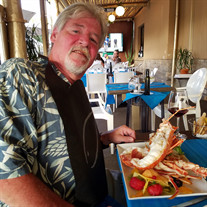 Edward A Coburn, Jr. died on Sunday, January 5th at the University of MD Medical Center in Baltimore after a short illness. He was surrounded by the ones he loved most in his last moments – his wife and soulmate, Petra, his son Ed III (Dos), his little brother Andy and his “other little brother” Mark. Ed was a wonderful person who was guided by the principles of honor, honesty and integrity. He always told the truth, even when nobody wanted to hear it – he was definitely not politically correct. He was born in Bluefield, WV and grew up in and around Baltimore, MD. After graduating high school, he joined the US Army and served with honor for 4 years. After his time in the army he started working in the field of environmental services and wastewater treatment and became a well-respected authority in his field. Ed loved to spend time at home with his wife and family, just sitting on the deck at night looking at the stars or having a cigar and a glass of wine after work. He loved to target shoot in his back yard, he loved to cook and eat well. He was an avid reader, he loved to learn new things all the time and he could fix just about anything. He had hoped to pass some of his knowledge and passion on to his grandson, Little Eddie, whose birth was one of his greatest joys in recent years. Ed lost his father, Edward Coburn Sr., when he was only a teenager and he missed his dad very much. Just a few years ago he lost his beloved older sister Edna, who was so very close to him and then he lost his second sister, Patti. He leaves behind many family members, friends and relatives who were lucky enough to be a part of his life and who will miss him tremendously. He is survived by the love of his life, Petra, his son Edward A Coburn III, his grandson Edward A Coburn IV, his German family – Hans and Christa, Johannes and Elke, and of course his brother Andy, his mother Imogene Krager and his remaining siblings Ronald and Valerie.

Edward A Coburn, Jr. died on Sunday, January 5th at the University of MD Medical Center in Baltimore after a short illness. He was surrounded by the ones he loved most in his last moments &#8211; his wife and soulmate, Petra, his son Ed III... View Obituary & Service Information

The family of Edward Anderson Coburn Jr. created this Life Tributes page to make it easy to share your memories.

Edward A Coburn, Jr. died on Sunday, January 5th at the University...

Send flowers to the Coburn family.