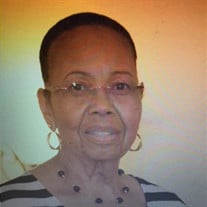 “Peace I leave with you, my peace I give unto you: not as the world giveth, give I unto you. Let not your heart be troubled, neither let it be afraid.” (John 14:27) Edna Walker Scott, 74, of Annapolis, Maryland transitioned from this life on Saturday, January 9, 2021 after a brief battle with Lymphoma (cancer). She was born at Ritch-Leaphart Hospital in Jesup, Georgia on October 12, 1946 to the late Lembrick Gabel and Conyers Elizabeth (Parker) Walker. Edna was the sixth of ten children. At an early age, she accepted Christ and was baptized at Bennett Union Missionary Baptist Church. As a church member, she sang in the youth choir and served on the junior usher board. Edna was educated in the Wayne County School System. She attended Wayne County Training School from 1st grade to 12th grade. After receiving her high school diploma in 1964, she matriculated at Morristown Junior College in Morristown, Tennessee and obtained an Associate of Arts in Early Childhood Education in 1966. Edna continued her education at Savannah State College (University) in Savannah, Georgia where she pledged Delta Sigma Theta Sorority, Inc. She graduated with her Bachelor of Arts in Elementary Education in 1969. In 1973, Edna obtained a Master of Arts in Special Education from Coppin State College (University) in Baltimore, Maryland. Edna Walker Scott married Warren Stanley Scott in August 1969. She started her teaching career in Ludowici, Georgia in September 1969. In 1971, she relocated along with her husband to Baltimore, Maryland where she continued her educational career. She was employed by the Baltimore City Public Schools System for more than 30 years. Edna retired from the Baltimore City Public Schools System in 2002 but continued to support the school system in various capacities. Edna was preceded in death by her parents, Lembrick Gabel and Conyers Elizabeth Walker; her husband, Warren Stanley Scott, and six siblings, Kim Elizabeth Walker, Howard Walker, Mary Elaine Cheatham, Sidney Lamar Walker, Eugene Louis Walker, and Barbara Cornell Marshall. Those left to cherish Edna’s memory are her daughter and son-in-law, Tammy Scott and Anthony Carr, Sr., Annapolis, MD; her grandson, Anthony Carr, Jr., Annapolis, MD; two sisters, Johnnie Mae Scott, Jesup, GA, Marion Walker, Annapolis, MD, and one brother, Dave Walker, Jesup, GA; and a host of nieces, nephews, cousins, and friends who will greatly miss her. Memorial Services to celebrate the life of Edna Walker Scott will be held at a later date.

&#8220;Peace I leave with you, my peace I give unto you: not as the world giveth, give I unto you. Let not your heart be troubled, neither let it be afraid.&#8221; (John 14:27) Edna Walker Scott, 74, of Annapolis, Maryland transitioned from... View Obituary & Service Information

The family of Edna Walker Scott created this Life Tributes page to make it easy to share your memories.

“Peace I leave with you, my peace I give unto you: not as the...

Send flowers to the Scott family.