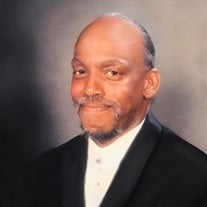 Dwight Alan Raikes, son of the late Martin Raikes, Sr. and Hazel Snowden McGowan departed this life at Anne Arundel Medical Center on October 36, 2019. Dwight received his education from Anne Arundel County Public Schools. Dwight worked for various organizations and companies throughout the years. He was employed with Raikes Construction where he was repairing, remodeling, or making home improvements until his illness no longer allowed him to work. Dwight attend Mt. Moriah Church. He was the man of the year in 2004 at Mt. Moriah. He sang with multiple choirs in and outside of the church. He was a devoted member of the Men’s Mission Choir and was the Men’s Mission Choir man of the year in 2003. Singing was Dwight’s passion, but he also enjoyed playing the harmonica and keyboard, watching sports, traveling, fishing and shooting pool. Dwight had an amicable spirit where he was able to find the good in everyone. He always had a kind or encouraging word. Dwight leaves to cherish his memories, his daughters: Michohn Montague, daughters Shametra and Stacie Hutton, son James Hutton III, his grandson: Howard Alexander III and J’shawn Holland; his granddaughters: Emani Poteat and Princess Bradford; his great granddaughters, Jordyn and Jiselle Alexander; his sisters: Toni R. Cooke, Rai Ann Watts (Rodney), and Jacquelin Johnson; his brothers: Robert Berryman and Michael Raikes; two aunts, Mary Thompson and Marion Colbert, a devoted friend, Pamela T. Joyce, along with a host of nieces, nephews and other family members. Dwight was preceded in death by four sisters: Emily R. Rowe, Rosilyn Johnson, Cynthia Richardson, and Deborah Mullins; and two brothers Martin Raikes, Kr. And Derrick Raikes Sr.

The family of Dwight Alan Raikes created this Life Tributes page to make it easy to share your memories.

Send flowers to the Raikes family.